Why a low loonie is no longer attracting U.S. tech firms to B.C.

Cheap dollar not the motivation behind expansion initiatives it once was, say experts

When the Canadian dollar took a nose-dive in the wake of the 2014 oil shock, American cybersecurity firm Fortinet Inc. (Nasdaq:FTNT) was quick to dial in on its outpost in Burnaby. There, 550 highly skilled tech workers were suddenly much cheaper sources of labour for the company operating in U.S. dollars.

“From a recruitment standpoint, it’s definitely going to help,” Joyce Chow, who now serves as Fortinet’s vice-president of human resources, told BIV at the time regarding the impact of the loonie’s tumble nearly a decade ago.

The dollar eventually crawled back up in the ensuing years only to find itself on the decline once more this year. Fortinet’s Burnaby office is now in the midst of recruiting another 130 workers after expanding its physical footprint by 107,000 square feet.

“However, this has not been a result of the loonie sliding, and Fortinet has a big base in Canada regardless of currency fluctuation,” Iolanda Mobilio, a spokeswoman working on behalf of Fortinet, told BIV in an email this month.

American tech companies are expanding vigorously in Vancouver, but the low dollar doesn’t appear to be the draw it once was.

The IT services firm launched its Vancouver operations in 2018 with 35 local workers and has since expanded to 120 based at the Sun Tower on 128 West Pender Street.

Smolarski said his company has since outgrown those offices and will be looking to hire an additional 100 workers in the coming year as it expands into a new 22,000-square-foot office on 545 Robson Street in January.

But the declining dollar hasn’t been driving its expansion efforts.

“We love the other components of that market,” said Smolarski. “It’s got a great talent pool, highly educated, highly motivated. We get some additional benefits from the government. All those things are more long-lasting than just a currency fluctuation.” 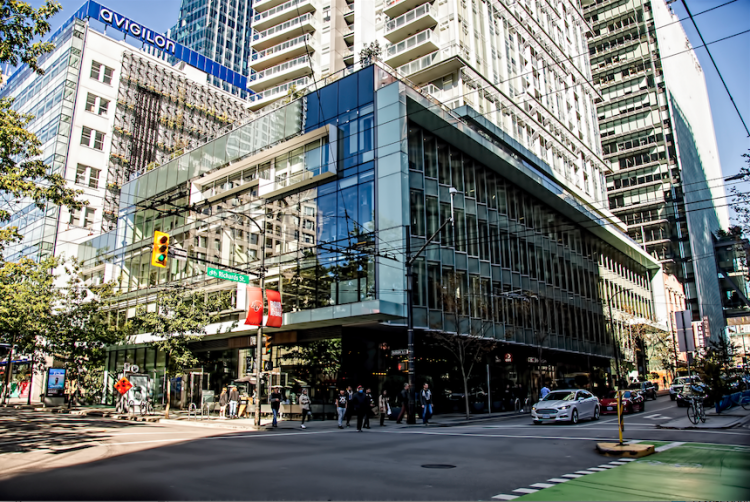 Miami-based Kaseya is set to move into new offices at 128 W. Pender St. after outgrowing its current space at the Sun Tower | Chung Chow, BIV


Ken Peacock, chief economist at the Business Council of B.C., said Canada’s relatively low dollar compared with the greenback was once a motivating factor for many U.S. tech firms looking to expand northward.

That’s less of the case now. American companies are motivated more by access to talent and Canada’s more progressive immigration policies that allow them to recruit employees from other parts of the world and bring them to work in a Canadian satellite office.

“It … largely was an immigration play when Microsoft [Corp. (Nasdaq:MSFT)] and some of the other tech companies came up here,” Peacock said, adding that intuition tells him these tech firms’ ongoing expansion efforts over the past decade have come as they’ve grown more comfortable with the teams built in B.C.

Only Vancouver’s own Lululemon Athletica Inc. (Nasdaq:LULU) has come close this year, securing 237,000 square feet in the city’s downtown.

“There’s been a huge trend of U.S. companies hiring in Canada, but I don’t think that the loonie sliding is making a big difference,” said Ilya Brotzky, CEO of Vancouver-based recruitment firm VanHack Technologies Inc. “It’s already happening a lot and will continue to happen more and more as U.S. companies generally have more funding, pay higher and are more aggressive than Canadian companies.”