B.C. housing market activity to be below normal levels in 2023: BCREA

B.C. should anticipate a difficult 2023 for the Canadian economy, with housing market activity below normal levels, according to the British Columbia Real Estate Association’s (BCREA) fourth quarter housing forecast.

This year, residential home sales will finish 34.4 per cent below the 2021 peak, and they will fall another 11 per cent to 72,960 units next year, according to the BCREA.

“The market will face a lot of challenges next year – some of them aren't new – like high interest rates were a factor of 2022 and will continue to be a factor in 2023,” said BCREA Chief Economist Brendon Ogmundson. “We might also have a slowdown in the economy.

“We're going to have high rates, maybe rising unemployment in the first half of next year. So overall, that's really going to challenge activity and I do think we will be headed for a strong recovery by the end of 2023.”

In the Greater Vancouver region, home sales recorded on the MLS system are predicted to finish the year at 30,000 units before slowing to 26,000 units in 2023 as the full impact of higher mortgage rates is felt, said the BCREA.

In terms of supply, slow sales activity has freed up inventory, marking an increase from record lows. The shift in the market in the second half of 2022 weighed on prices, but with a slowdown in active listings, it is not enough to put downward pressure on pricing. Due to high prices and activity in the beginning of 2022, annual price growth this year will be positive, according to the BCREA.

However, as prices have fallen from their peak earlier this year, the BCREA said this will translate to the provincial average price being down about 5 per cent in 2023.

Ogmundson said prices have been coming down from their peak for about six months and have flattened out in the past two months.

“If we just stay flat at current price levels, when we compare year-over-year, by this time next year the average price level will be down 5% in 2023,” he said.

In the Lower Mainland specifically, prices are currently down roughly 9 per cent from their peak in February, according to the BCREA. 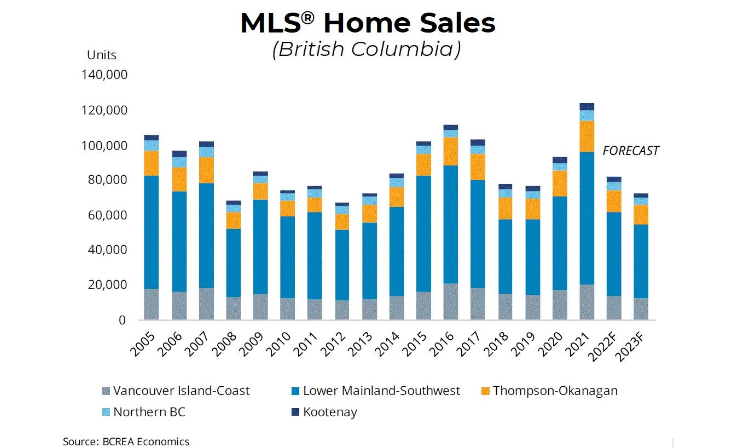 The economic growth in 2022 is seeing cracks in the foundation for interest rate sensitive sectors like the housing market. Due to monetary tightening, mortgage rates are at almost 5.5 per cent, the highest they’ve been since 2007. Even qualifying for a mortgage is out of reach for some British Columbians who can’t clear the 7.5 per cent stress test, according to the BCREA.

The report also predicts that unemployment will rise from 4.9 per cent at the end of 2022 to almost 6 per cent in 2023. When unemployment goes up, there are more listings seen in the market, says Ogmundson.

“When we have a negative shock to the economy that causes a rise in unemployment, you tend to see an increase in things like listings,” he said. “People unfortunately lose their jobs and are forced to sell, resulting in that uptick.”