When I reached Duane Vienneau on Tuesday morning to talk about the BC Lions, the club’s new COO’s excitement was practically bursting from his voice.

However, despite all the excitement, Vienneau kept one last proverbial cat in the bag at the time about “a potentially major announcement” later in the week.

“I’ll just tell you this: It will be worth waiting for,” he said.

Vienneau was not joking. On Thursday, the Canadian Football League announced that Vancouver will be the host of the 111th Grey Cup game and festivities in 2024. The news was seemingly a culmination of a resurgent season in 2022, where the team went from years of sagging attendance and shrinking local visibility to suddenly become the city’s sports darlings.

“It has been a building season,” Vienneau said. “Every game and every day, things are getting a little better on the business side. We really wanted to be engaged in the community, to have minor football players, families and people in general just being proud of the BC Lions and wearing the logo. And we are making great strides for that.”

On Sunday, the Lions will host the Calgary Stampeders in the CFL Western Conference semi-finals, thus becoming the first Vancouver-based major league sports team to bring a home playoff date to the city in more than five years.

Ticket demands have been so strong that the club has opened up the upper deck of BC Place – only the second time this season this has taken place (after the regular season opener, which also featured a One Republic concert, which drew a crowd of 34,082).

“This is a big opportunity for them,” said Matt Sekeres, co-host of Vancouver sports talk podcast Sekeres & Price who has covered B.C.’s sports scene for more than a decade. “And that’s because of the scarcity of these [home playoff games] with our local sports teams, which has allowed this game to be an event... and Vancouver is an event town. We’ve just been really dry on this front over the last decade.”

Doman was unavailable for comment due to his travel schedule to Toronto for the Grey Cup announcement this week, but Vienneau – who was named to replace outgoing president/CEO Rick LeLacheur in August – was one of the first big hires under the new ownership regime. Vienneau, previously the chief Grey Cup and events officer at the CFL, said Doman’s role in the turnaround is impossible to miss.

“He just has huge passion and energy,” Vienneau said, referring to moves such as the decision to bring in One Republic, bringing back pre-game Backyard Block street parties, and a concerted effort to bring grassroot and youth football players/teams into the fold. “He wants to do the best everyday... and that strive for success is contagious.”

The hiring of Vienneau also plays into that strategy of engagement, fanfare and creating events-like atmosphere. The COO’s previous experience organizing Grey Cups (he was the executive director of two such festivals in Edmonton) meant that Vienneau knows how to create that atmosphere. 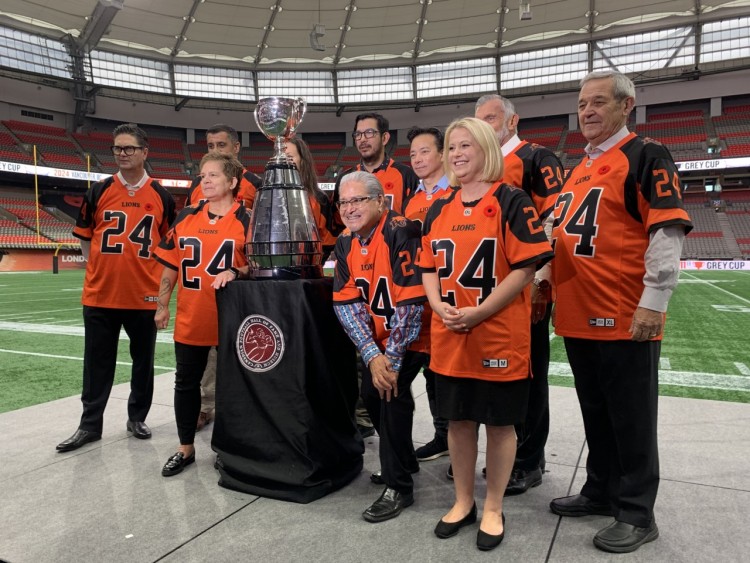 “A big part of Amar’s strategy is to make very single BC Lions home game an event,” Vienneau said. “In my previous role, I was responsible for the largest annual Canadian sporting event. So we really want to look at that in the future – not saying we are going to have One Republic at every single game – but how do we create an environment around our games so that it’s can’t miss because every game will be a little different?”

In that sense, hosting the Grey Cup in two years’ time give the club a timeline and a goal to build towards, he added – creating meaningful events at Lions games over the next two years leading up to the big party in November 2024.

“When you host a Grey Cup, everything from now to two years from now will be focused on both hosting the Grey Cup and working on your BC Lions football team at the same time,” Vienneau said. “So you have to do things in collaboration... Everything you do is [up to the Grey Cup] is almost like test events, if you will. You focus on building your team, the fan activations and everything else on which you build towards hosting the Grey Cup.”

One elephant in the room remains, however. A major part of the team’s resurgence this year came from new quarterback Nathan Rourke, whose record-breaking performance in the first 10 weeks of the season pushed the team to an 8-1 start while capturing fan attention not just in B.C. but throughout the league.

Making Rourke even more of a draw for fans is the fact the he is Canadian, born in Victoria and raised in  Oakville, Ont. What Rourke represents beyond his football success cannot be understated, said Justin Dunk, managing editor of Canadian football news site 3DownNation and a former starting quarterback at the University of Guelph.

“We can see it at 3DownNation, where anything we post about Rourke is very well read,” said Dunk, who is based in Ontario. “You can see it in the TSN television ratings for any game Rourke was playing in. Year-over-year, there is a big boost for BC Lions games and even, I think, outside of the Lions’ fanbase. There were average CFL fans and even new CFL fans that were tuning in.

“When Rourke was healthy, he can put up points at a historic pace. And I think that has really grabbed the attention of people across the country... My two little nephews, 7 and 6, are now watching more football with me, and their favourite team is the BC Lions. Their favourite player is Nathan Rourke. My oldest nephew, Liam, says he wants to be just like Nathan Rourke and be the quarterback of the BC Lions. I think that’s a tangible example of the impact he has had.”

Rourke was injured in Week 11, although he returned to start the last game of the regular season last week and will start Sunday against Calgary. His historic performance has also sparked speculation that Rourke may receive offers from NFL clubs in the United States and end up south of the border next season.

Sekeres, however, is more hopeful. He noted that ultimately fans resonate with winning, entertaining football. If the Lions can keep that facet of their operations going, building on this year’s success should be possible on- and off-the-field.

“If Rourke leaves for the NFL and the Lions don’t adequately replace him at quarterback, then yes, it is going to be very difficult to maintain even what they have this year,” Sekeres said. “But if Rourke is back, or if they adequately replaced the quarterback position, I think they can build on this year.

“Yes, it would be difficult to match the cachet of a Canadian quarterback like Rourke. But I think part of the problem with the BC Lions over the last decade was not having that big star quarterback at a sustained level of success... A Canadian quarterback may get you some headlines you wouldn’t otherwise get, but you can replicate some degrees of success if you have excellence at quarterback.”

Vienneau said the club will do everything within its power to maintain excellence on and off the field, adding that the CFL approving BC Lions as 2024 Grey Cup hosts shows that the league has recognized the franchise’s resurgent status.

“When Grey Cups are hosted, there are a lot of criteria you have to meet,” Vienneau said. “You basically have to write a business plan; is the club ready? Can you host? Do you have the infrastructure and the skills in place to take the Grey Cup to the next level? And I think that was very evident in our bid, starting with Amar at the top.

“There’s just this renewed energy and enthusiasm with all that has happened in the last year or so. And everything now, from the team on the field to the team is the office, is about working hard to elevate our game.”