Hundreds gathered at the Vancouver Art Gallery to participate in a vigil for the victims of an apartment fire in Urumqi, the capital of China’s northwestern Xinjiang province

Around 200 people gathered on the Vancouver Art Gallery’s north plaza for a candlelight vigil for the Uyghur victims of a Nov. 24 apartment fire in Urumqi, capital of China’s northwestern Xinjiang province. At least 10 people died when firefighters and equipment could not reach them in time. It became the tipping point for anger that has simmered for weeks over pandemic lockdowns, including mass-protests at the Foxconn iPhone factory in Zhengzhou.

On the rainy Vancouver night, flowers and lit candles were strewn across the art gallery’s steps, with portraits of some of the Urumqi fire victims interspersed with messages in Chinese and English, urging Xi Jinping to resign and echoing the “give me liberty or give me death” phrase. Winnie the Pooh dolls were propped-up, back-to-back on a table, representing an unflattering caricature of Xi. One poster overlaid the Nazi swastika on the Chinese Communist Party’s hammer and sickle and mocked the party’s “serve the people” slogan.

People waved replicas of the sign Wulumqi Road sign. So named for the Xinjiang capital, the Shanghai street became the rallying point for protesters on Saturday.

Speakers on a portable sound system led the Vancouver crowd in song and slogan, repeating phrases heard throughout the weekend in social media clips from Chinese street protests. Some speakers also expressed support for Tibetans, feminists and LGBTQ people.

Recently elected ABC Vancouver Coun. Lenny Zhou Tweeted photos he shot after the protest, including a selfie beside a replica of the street sign on a silent protester’s tablet.

“In memory of all those who lost their lives due to the zero COVID policy. Appreciate everyone who attended the commemoration event tonight at [VAG], even with the wind and rain. The light of [candles] won’t go out!” Tweeted Zhou, who originally came from Beijing to Vancouver as a student in 2005. 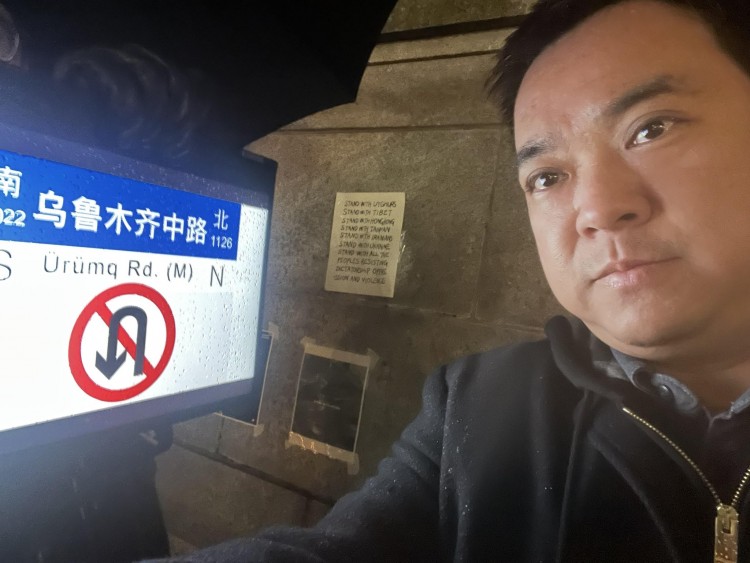 A few protesters waved Republic of China flags. One student explained he is not Taiwanese, but that he is against communism and believes the true government of China fled to Taiwan in 1949. He exchanged words briefly with a bigger group which had a smaller version of the People’s Republic of China’s five-star flag. The Vancouver Police officers parked on Howe Street were not needed.

Afterward, an elderly man moved a flyer from the art gallery wall to a lamp post at Georgia and Howe. It urged support for Uyghurs, Tibetans, Hong Kongers, Taiwanese and Ukrainians, to “stand with all the peoples resisting dictatorship, oppression and violence.”

The man declined to give his name, but said he was originally from Hong Kong and encouraged by the youth of the crowd. “This is a good sign for us,” he said.

Andrew, who did not want his full name published, was the man holding the tablet from Zhou’s selfie.

“Although I've been a Canadian for a very long time, I still have my Chinese heritage, my family is still Chinese and I believe I should be here and to show support, show solidarity with my own people,” he said. “To show that even if this road sign was removed in Shanghai, that it will pop up worldwide in any city, as long as people stand with democracy, stand with sensible humanity.” 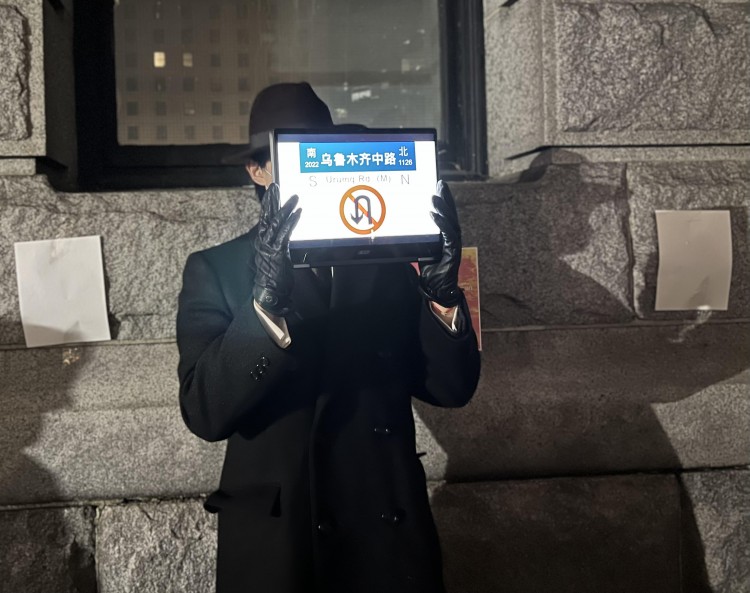 Andrew, who declined to have his last name published, silently protested by displaying on his tablet a replica of the sign from a Shanghai street where protesters gathered to mourn the dead in a Xinjiang apartment fire and demand an end of the Chinese Communist Party's strict pandemic lockdowns. Behind him are blank sheets of paper, like the ones waved last weekend by dissidents in China | Photo: Bob Mackin

The protests across China recall the student uprising in the spring of 1989, which ended with the Tiananmen Square massacre. Andrew, who said he studied political science, worries that history could repeat. He also called the students who came to protest outside VAG courageous.

“There's a very real chance that people are putting their security at stake, because first of all, many of them, the international students, have family in China. Time and again, it has been shown that the CCP will make problems and will warn their family members, so that they can stop their protests overseas.”

In the 1970s, the Chinese government created the Chinese Students and Scholars Association (CSSA), which has affiliates on university and college campuses around B.C. A 2020 report by the U.S. State Department said the CSSA is overseen by the United Front Work Department to “monitor Chinese students and mobilize them against views that dissent from the CCP’s stance.”

Nobody from the CSSA chapter at the University of B.C. responded for comment.

The mood Sunday night was in stark contrast to the heated August 2019 protests by Chinese nationalist students in various cities, including Vancouver, to counter pro-democracy demonstrations in support of Hong Kongers.

Local protests took place outside the Broadway City Hall Canada Line station, on the Granville Mall, outside the Chinese consulate and Tenth Church, where the Hong Kong protesters held a prayer vigil. Some of the nationalists even waved Chinese flags in a parade of supercars. The Canada Vancouver Shanxi Natives Society later took responsibility for organizing the nationalist protests.