Canadian corporate profits have soared over the past 18 months across a wide range of industries, including finance and resources. But profits in the real estate sector have declined, according to Canadian Centre for Policy Alternatives data. The number of agents working at British Columbia’s largest real estate firms has also declined, according to data collected on Business in Vancouver’s list of the biggest commercial real estate brokerages in B.C. (page 10). 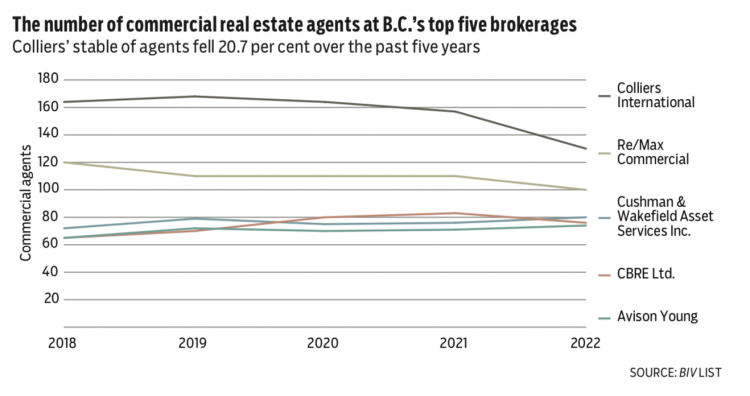 While the average number of commercial agents at B.C.’s big- gest real estate brokerages has fallen, the median number has grown. After dropping in 2019, the median jumped 52.9 per cent to 26 in 2022 from 17 in 2019. This suggests that while larger firms higher on the list shrunk, smaller firms lower on the list grew.

The three brokerages that grew the most over the past year were all ranked in the lower half of BIV’s list. Claridge Real Estate Advisors Inc. (No. 15) increased its num- ber of agents by 28.6 per cent; Goodman Commercial Inc.’s (No. 17) grew 20 per cent; and Taurus Commercial Real Estate Services (No. 20) increased its number of agents by 33.3 per cent.