By Bob Mackin | November 29, 2022, 10:19am
China's flag was given prominence over Canada's when People's Republic of China Consul-General Yang Shu spoke Nov. 22 at the Canadian Alliance of Chinese Associations board swearing-in (PRC Consulate)

Two Richmond politicians joined China’s top local diplomat at a Nov. 22 ceremony for the swearing-in of a board affiliated with the Chinese Communist Party.

Liberal MP Parm Bains (Steveston-Richmond East) and Richmond Coun. Alexa Loo sat in the front row of the Canadian Alliance of Chinese Associations (CACA) event with People’s Republic of China Consul-General Yang Shu. Bains and Loo also spoke from a podium at the event, according to a report by Phoenix TV, an outlet associated with the government in Beijing.

“They’ve been contributing in a number of ways with charitable causes,” Bains said on the Phoenix TV report. “We’ve had several, not only natural disasters, but a pandemic we went through.” 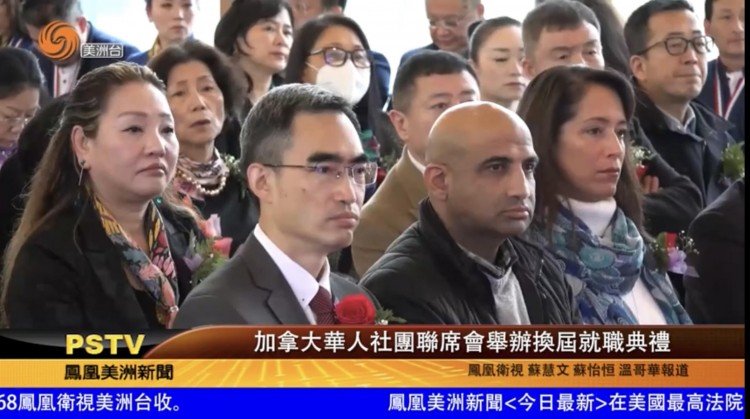 The event was the inauguration ceremony of the 9th executive team of CACA, a Richmond-based umbrella for more than 100 business and cultural groups whose website states that it is in active participant in Overseas Chinese Affairs Office (OCAO) activities. OCAO is an arm of the CCP’s United Front program. A 2019 report from the National Security and Intelligence Committee of Parliamentarians warned that one of the United Front’s aims is to influence foreign politicians to adopt pro-China positions.

The consulate’s Chinese website said Yang reiterated the goals of the recent CCP 20th national congress and expressed hope that new executive chair Xue Xiaomei and the rest of CACA would continue to support their ancestral country’s economic and social development. It also said Xue mentioned support for reunification of China, a reference to Xi Jinping’s goal of taking control of Taiwan.

Neither Bains nor Loo responded to interview requests. Richmond Coun. Kash Heed, a former B.C. Solicitor General and police chief, said politicians at every level of government need to be cautious of foreign influence attempts.

“Local government representatives get invitations from all types of organizations throughout the Lower Mainland. It's incumbent upon any of these elected members to do their due diligence, to ensure they're not caught up in any other foreign influence political moves,” Heed said.

Prior to her recent re-election, Loo joined Yang outside the Vancouver Art Gallery at a culture festival on Oct. 1, to celebrate the 73rd anniversary of CCP rule in China.

A statement released by Bains’s office after the Chinatown event said that he believed “open dialogue is more helpful” in dealing with China.

“I will continue to share and promote Canadian values and be a vocal advocate for human rights with all diplomats that are stationed here in Canada,” said Bains.

However, he subsequently admitted that he did not discuss human rights with Tong.

“The fact that local politicians are really dancing to the tune of China’s senior official in the region is, to my mind, just unconscionable and it should not happen,” said David Mulroney, former Canadian ambassador to China, in a February interview. “There should be Canadian solidarity on issues around human rights.”

The CACA board swearing-in came after Trudeau’s tense sidelines meeting with Xi at the G20 summit in Bali and a Global News report that CSIS warned Trudeau last January that the Chinese government meddled in the 2019 federal election.

Three weeks after the original Global report, Trudeau claimed he knew nothing about Chinese government-funded campaigns.

In the 2021 election, Bains beat Conservative incumbent Kenny Chiu, who had been targeted by a Chinese social media disinformation campaign after proposing a foreign agents registry and being sanctioned for voting to declare China’s treatment of Uyghurs a genocide.

The consulate’s Chinese website said that Yang congratulated Krog on his re-election. A photo showed Krog, holding a facemask, standing next to Yang, with more than four consulate-branded gift bags on a table behind them.

“The two sides exchanged views on jointly promoting local exchanges and cooperation between China and Canada,” said the consular website.