Defence departments in Canada and the United States investing in B.C. robotics

Sign a contract to provide the Department of National Defence (DND) with exoskeletons and one might presume soldiers will soon be donning the wearable robotic apparatuses in the battlefield.

“It’s not for sending more soldiers to war,” said Siamak Arzanpour, CEO of a Vancouver-based robotics firm that landed a $663,000 contract with the DND in September.

After a soft chuckle, Arzanpour explains the application for his company’s exoskeletons is health care.

Human in Motion Robotics Inc. is set to deliver a pair of its lower-limb exoskeletons, known as XoMotion, to a hospital on Prince Edward Island to see if the robotic units can help veterans with motion disabilities with their physical rehabilitation.

His robotics firm specializes in two variations of exoskeletons, which can run on batteries for about four hours and weigh in at 70 kilograms. One type helps people with physical rehabilitation, such as those aforementioned veterans, and another helps people in wheelchairs walk without assistance. 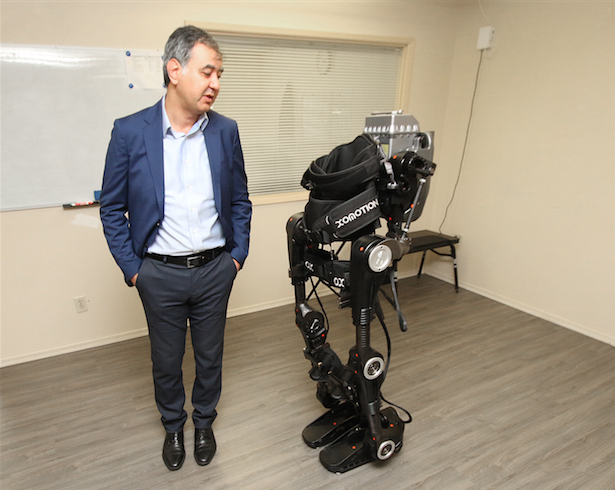 Siamak Arzanpour, CEO of Human in Motion Robotics Inc., with one of his company's made-in-B.C. exoskeletons | Rob Kruyt, BIV

And while the company has no immediate plans to equip soldiers for the battlefield, Arzanpour sees big-time market potential behind deploying his company’s exoskeletons for more than only health-care purposes.

“We can build a significantly lighter version of the exoskeleton for [outer] space application,” he said, referring to challenges spacefarers face when it comes to muscle atrophy in zero gravity.

This lighter version of the exoskeleton could also be applied to elderly citizens who need assistance walking or even athletes looking to train their bodies using new ways.

Human in Motion is not the only B.C. robotics firm banking on the market potential behind exoskeletons.

Vancouver-based Bionic Power Inc.’s leg-mounted Agilik exoskeletons can be used by children who have difficulty walking due to crouch gait, an abnormal walking pattern commonly found in people with cerebral palsy. But the company’s technology has also caught the attention of the U.S. Office of the Secretary of Defense, which signed a US$1.25 million contract with Bionic Power to field-test its Amplify exoskeletons designed for soldiers.

Those latter exoskeletons are expected to help soldiers with carrying equipment by reducing the amount of weight they bear while walking.

Meanwhile, Langley’s Genesis Robotics has developed what it calls a LiveDrive actuator – the part of a robot that allows it to move – for use with exoskeletons. Most actuators in robotics are relatively bulky electric motors, requiring a number of complex parts that can inflate the robot’s weight and the expense.

Genesis Robotics has developed the LiveDrive actuator to amplify magnetic forces and developing a structure that allows it to withstand extreme forces. The result is a device that is half as expensive as conventional actuators and lighter and safer to operate side by side with humans, according to the company.

Genesis Robotics has patented a number of reference designs, such as an exoskeleton that can assist people with disabilities, and walking robots that can help carry items for the elderly, to demonstrate to the industry what the LiveDrive is capable of.

In 2018, U.S.-based Koch Engineered Solutions took a controlling interest in the Canadian firm, which announced in June that it was launching an office in Frankfurt, Germany, as it ramps up commercialization.

The market potential for exoskeletons, which have been getting lighter and cheaper to produce, is set to surge in the coming decade, according to forecasts from Acumen Research and Consulting.

“Growing applications across a wide range of industries, an aging workforce, technological advancements, and expanding reach in the military and health-care industries are driving growth in the worldwide exoskeletons market value,” Acumen’s August 2022 report concluded. “These outfits are projected to be widely used in health-care systems and to benefit from an increase in the number of rehabilitation clinics. The development of active and partially passive technology is one of the primary factors influencing the need for exoskeletons market.”

Meanwhile, Arzanpour said one of the biggest challenges the industry needs to overcome is some of the mobility issues affecting exoskeletons.

“Almost all of them can only help people to stand up and walk forward,” he said. “Our exoskeleton can support all the complex motions that the able-bodied can do. For example, walking forward at different speeds, sidestepping, backwards stepping, turning, [stepping up] stairs, crouching. All of these are different, complex motions [that] are supported by our exoskeleton.”