By Glen Korstrom | November 9, 2022, 8:00am
Customers line up in March outside the Jollibee restaurant at 833 Granville Street | Glen Korstrom

Restaurant executives and entrepreneurs opened 27 new eateries between November 2021 and August in the 90 blocks of real estate that the Downtown Vancouver Business Improvement Association (DVBIA) oversees, according to a new report.

The DVBIA’s Downtown Storefront Report noted those openings, along with 13 food and beverage outlet closures in the same time frame.

The result was a net total of 14 additional eateries in the 10 months up until August in an area that zigzags to include Vancouver’s central business district.

That increase is far more than in any other retail category.

In the non-food retail sector, the report counted 15 store openings and 14 closures in that same time period. That includes five clothing stores that closed while only three apparel retailers opened.

“That conforms to what is happening across the province.”

He estimated that B.C. had around 15,000 eateries before the COVID-19 pandemic, in early 2020, rattled the sector with rotating waves of restrictions.

The nadir for the restaurant industry likely came in the fall of 2021, which was also when the report started counting new openings, he said.

Tostenson estimated that B.C. lost about 2,100 restaurants by November 2021, and that the sector has climbed back with a net total of approximately 1,100 new eateries to reach around 14,000 total restaurants provincewide.

The restaurant opening that caused the biggest buzz in downtown Vancouver in the past year was undoubtedly in February, when Philippines-based Jollibee opened its first B.C. location at 833 Granville Street.

So many people wanted to try the popular fast-food restaurant’s fried chicken that Jollibee regularly had four holding pens where people could line up outside its store. 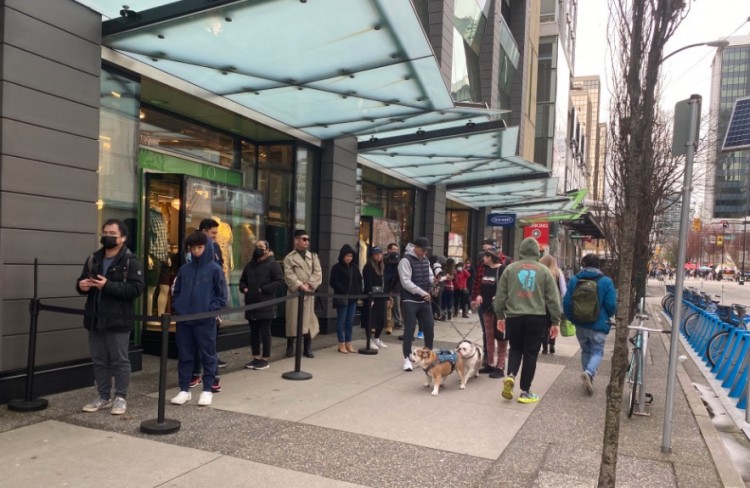 (Line-ups for Jollibee stretched around the block and up Robson Street more than a month after it opened | Image: Glen Korstrom)

Jollibee then opened its second Vancouver location, at the corner of Cambie Street and West Broadway, on October 20.

The DVBIA broke down food-and-beverage retail openings into subsectors, and found that the hottest subsector was quick-service dining.

There were 11 fast-food eateries that opened in the DVBIA catchment area between November 2021 and August, while five closed.

In the café and bakery subsector, one closed while six opened.

Driving these businesses has been an uptick in street traffic.

Data from the devices showed a huge increase in year-over-year traffic each month between November 2021 and May.

There was some talk during the recent municipal election campaign about a large number of empty storefronts downtown but the DVBIA’s report found 87.3 per cent of 1,048 storefronts in the area were occupied in early August. That occupancy rate is up from 85.9 per cent in November 2021, according to the report.

In contrast, however, all of the city’s business-improvement-association districts combined had an 88.1 per cent occupancy rate, the report said.

The DVBIA’s catchment area is the largest for a Vancouver business improvement association. It stretches north from Pacific Boulevard between Burrard Street and just south of Richards Street. Its border largely follows Burrard Street, and an alley between Richards and Homer streets, with some zigzagging. The DVBIA’s area juts west along an alley between Robson and Alberni streets to enable it to include the Alberni Street shopping strip. Its border then tracks along Jervis Street north to include Coal Harbour businesses and Canada Place. Its eastern border includes portions on Hamilton Street and on Richards Street.

No one at the DVBIA was available to discuss its report.