Representatives from eight Canadian environmental groups have filed a complaint with Canada’s Competition Bureau alleging the country’s most popular forestry certification standard has made “false and misleading” claims in an effort to greenwash the country’s lumber and wood products.

The environmental law firm Ecojustice filed the 39-page complaint against the Sustainable Forestry Initiative (SFI) on behalf of the eight organizations, including Greenpeace Canada and the David Suzuki Foundation.

By not prescribing that logging meet any definition of “sustainable,” the complaint claims the SFI’s certification process acts as an industry shield making it appear that a huge share of Canada’s forestry operations are doing what they can to protect the environment.

“You go to the Home Depot, and you look at plywood, you're gonna see a stamp that looks like a leaf… with a sustainable forest certification or SFI certified. It's a marketing tool,” said Devon Page, executive director of Ecojustice. “They don't actually confirm sustainability.”

SFI did not respond to requests to comment and the Competition Bureau has yet to make any determination on the group's claims.

More than 150 million hectares of forest in North America hold an SFI standard, making it the the largest certification system in the world. Roughly 76 per cent of that SFI certified land is in Canada.

“Canada has embraced certification on a scale unseen in any other jurisdiction. So you get the impression that Canada undertakes responsible forestry,” Page said.

Jay Malcolm, who as a retired forestry professor at the University of Toronto also submitted the complaint, said under the scheme, the logging industry is not required to protect endangered species like caribou. Instead, they only have to have a program in place that’s related in some way, without any measureable outcomes.

“The logging industry is using its own certification system to pass off wood products as carbon-neutral and sustainable," he said in a statement. "But if you look into the details of the standard, there’s nothing backing those claims up.” 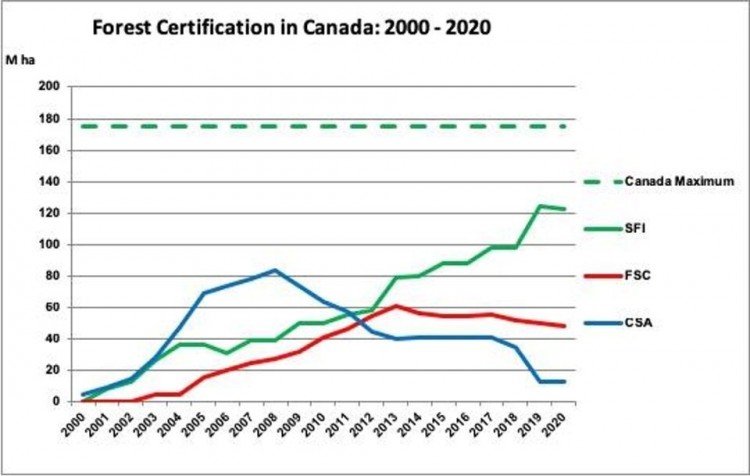 As seen in this graphic included in the Competition Bureau complaint, the Sustainable Forestry Initiative (SFI) has come to dominate all other third-party sustainable forestry standards in Canada, something Page said began in the late 1990s after many governments moved to deregulate the industry and. woodbusiness.ca via Competition Bureau complaint

Page says about 36 per cent of Canada’s logging operations are certified, largely through three schemes. The Forest Stewardship Council (FSC) has the strongest mechanisms to ensure compliance, though many have criticized it for failing to live up to its promises.

The other two major schemes, SFI and the Canadian Standards Association (CSA), have been slammed by some as industry tools. CSA already faces a pending Competition Bureau investigation, and if the Competition Bureau rules in favour of the two complaints, Page said it would further discredit most of Canada’s claims to running a sustainable forestry industry.

The marketing of Canadian forest products has been thrown in the spotlight in recent weeks after a letter from Canadian ambassador to the European Union Ailish Campbell was leaked to the media.

The letter, dated Nov. 17 and previously reported on by Politico, raises concerns that EU proposed regulations on deforestation-free products would throw up trade barriers blocking export of Canadian forest products to the continent.

Campbell notes in the letter that Canada shares “the goal of preventing deforestation globally” but fears  the proposed rules would add “burdensome traceability requirements” and put at risk $1 billion in forestry and agricultural exports.

Page said the timing of the complaint was on purpose. Next week, just under 200 nations will send delegates to Montreal as Canada hosts the 15th United Nations Conference of the Parties. Also known as Nature COP, members nations are meeting to establish a global framework to protect habitats and ecosystems around the world, and stem a biodiversity crisis that is increasingly worrying scientists.

The Canadian federal government has committed to protecting 30 per cent of its land and ocean by 2030 — the minimum scientists say is needed to halt and reverse biodiversity loss. Canada has made its own calls to the world to follow its national biodiversity targets and put Indigenous guardians at the core of conservation planning.

“Canada does a really good job on the international stage of making promises or broad proclamations about how we take care of our natural environment,” said Page. “And either we're lying about that, or we don't fulfill the promises.”

The complaint to the Competition Bureau claims SFI’s misrepresentations are contributing to unsustainable logging practice both in Canada and across the world on an “immense scale.”

It’s calling on SFI to pay a $10 million fine and publicly retract claims its certification process ensures sustainable logging. The complaint also request any claims of suggesting its standard is sustainable be scrubbed from its website and other public communications.

A rise in 'greenwashing' allegations

Canada’s Competition Bureau is set up to protect and promote competitive business practices across the country. In recent years, it has increasingly taken on cases related to ‘greenwashing’ — false or misleading environmental claims often advertised to make a company or product appear more sustainable than it really is.

The SFI complaint represents the latest salvo from environmental groups looking to target industries they see as driving climate change and biodiversity loss in Canada.

In September, a group of health professionals filed a complaint against the Canadian Gas Association, alledging the industry group had deployed greenwashing tactics in an advertising campaign that touted gas as an "eco-friendly" fuel. And in October, the Competition Bureau launched an investigation into RBC after a number of individuals, including Kukpi7 Judy Wilson — secretary-treasurer at the Union of BC Indian Chiefs (UBCIC) and chief of the Skat'sin te Secwepemc-Neskonlith Indian Band — filed a complaint calling for RBC to end its financing of fossil fuels and stop “deceiving the public.”

The Competition Bureau has signalled it would move to impose harsh penalties on companies it finds guilty of greenwashing.

Earlier this year, the consumer watchdog reached an agreement with Keurig Canada to pay a $3-million penalty after it made false and misleading environmental claims around its coffee pods.

In addition to the $3-million penalty, Keurig Canada was forced to pay for the cost of the bureau’s $85,000 investigation and donate $800,000 to a Canadian environmental charity.

The company is no longer permitted to make bogus claims on its packaging, online or in news media.