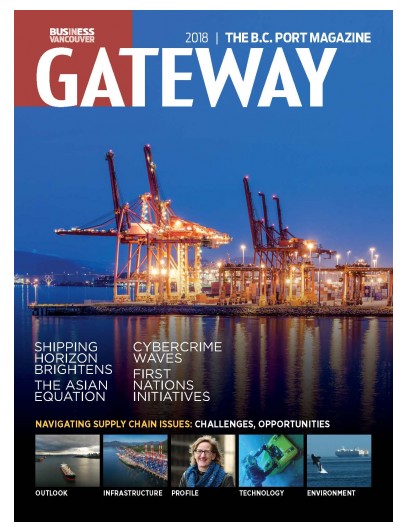 A partnership between the Vancouver Fraser Port Authority, parks board and three local First Nations is restoring a critical piece of coastal wetland habitat on the south shore of Burrard Inlet

Port promoting from within

Shipping on course for recovery

Port in a storm

Disruption looms large on the horizon for major transportation gateways in B.C. and elsewhere around the world.

That’s a good-news-bad-news forecast. The good news for cargo movement: disruption could create enormous marketplace efficiencies. The bad news: the shipping sector is not traditionally big on timely adoption of technological change.

As it is with the increasingly large vessels that carry containerized cargo on major international trade routes, altering course mid-voyage takes time.

But PwC has estimated that artificial intelligence, robotics and other forms of smart automation could contribute approximately US$15 trillion to the global economy by 2030.

How ports on B.C.’s West Coast and elsewhere in North America incorporate technological change in their operations will determine their long-term competitiveness and success.

This year’s Gateway looks at some of those technology issues along with port environmental initiatives and challenges.

As always, local, regional and global economies will also have a major impact on B.C.’s trade gateways.

At the tail end of 2017 and the start of 2018, economists were largely positive about shipping’s prospects for the year ahead. U.K.-based Oxford Economics raised its global GDP growth forecast to 3.1% from 3% as its analysis noted that the global economy might have entered “a sustained period of stability.”

Add in an ability for ports and supply chain companies to harness the multifold benefits of the digital revolution and prospects are bright for the business of trade corridors and gateways, which is fundamental to the economic well-being of Canada’s standard of living.