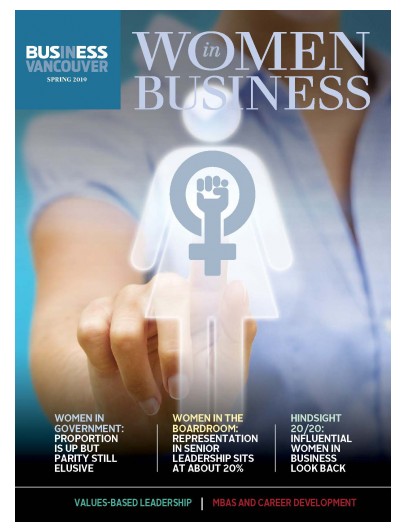 Pushing for parity: Child care tops the list of barriers for female politicians

The face of B.C. leadership: It's changing, but not fast enough

Higher pursuits: With women still vastly under-represented in executive ranks, how important is an MBA to their success?

Letting go of labels: No need for stereotypes to be obstacles, say female leaders

The long path to parity

Welcome to the latest edition of Women in Business magazine. This issue coincides with the 20th anniversary of the Influential Women in Business Awards. In honour of this milestone, we share reflections and wisdom from 20 past honourees in our “Hindsight 20/20” feature.

We also take this opportunity to examine how we stand in terms of gender parity in government and in the boardroom.

Twenty years ago, in 1999, just over 20 per cent of Canada’s elected MPs were women; in the last federal election, the proportion was 26 per cent – an improvement of six percentage points in two decades. As Esquimalt-Metchosin MLA Mitzi Dean says in “Pushing for Parity,” Brigitte Petersen’s story on female representation in government, “we have a long way to go.”

The numbers are worse in the boardroom: as Hayley Woodin reports in her story “The Face of B.C. Leadership,” the proportion of women in the boardrooms and executive levels of B.C.’s biggest companies sits at about 20 per cent.

So how do we really move the dial? Tina Strehlke, CEO of Minerva BC, suggests several ways forward in her column “Advancing Women’s Leadership,” while Women’s Enterprise Centre CEO Laurel Douglas lays out a method to help change our thinking around gender equality in her column “Moving Mindsets.”

Writer Baila Lazarus explores the benefits of executive education in furthering women’s careers in her story “Higher Pursuits.” In “Letting Go of Labels,” Brigitte Petersen talks to female executives in male-dominated fields who have busted stereotypes to lead in their sectors. And Odgers Berndtson partner Elaine Grotefeld, in her column “The Power of Getting Together,” writes about how women working in the fast-growing clean-tech sector are supporting each other and sharing purpose and camaraderie in a networking group she started.

The statistics can be discouraging. The World Economic Forum, in its recently released Global Gender Gap Report 2018, predicts that, based on current rates of change, it will take 108 years for the global gender gap to close – and 202 years before we achieve economic gender parity.

However, if the remarkable women of B.C.’s business community featured in this and every edition of Women in Business have anything to say about it, we will prove them wrong.