Licensed cannabis producers are ramping up production to get ready for legalization of marijuana in Canada this year, but are also bracing for demand to far outstrip supply because of restrictions on imports.

Health Canada forbids licensed producers, which will be the only authorized sellers of marijuana to provincial governments, from importing any cannabis for sale, regardless of whether the purchase is for medical or recreational purposes.

The only cannabis imports that the department allows are those classified as genetic material for licensed dealers that conduct research and testing.

Imports are also hindered by three international treaties to which Canada is subject, forbidding signatories from importing or exporting cannabis for recreational purposes.

Restrictions on imports to Canada are increasingly significant because, in the wake of the Senate’s June 7 Cannabis Act approval, the bill is on track to become law and allow sales of recreational cannabis countrywide within about two months

Indications are that there will be an immediate product scarcity.

A CIBC report last month calculated annual demand for legal cannabis in Canada at 800,000 kilograms by 2020. Current production, it noted, is around 350,000 kilograms per year. The report quoted Vic Neufeld, CEO of the licensed producer Aphria Inc. (TSX:APH), as saying on the company’s earnings call that “unless someone’s out there hiding 100,000 kilograms, we’re looking at a real shortfall.”

Neufeld and other Canadian executives at licensed cannabis producers are carefully watching the shifting landscape of import and export regulations around the world. In many cases they are investing in facilities or joint ventures in lower-cost regions, such as the kingdom of Lesotho in Africa, where cannabis cultivation is allowed and there are good growing conditions.

At the same time, producers are hoping that laws in those places eventually allow for exports that are destined for recreational users. 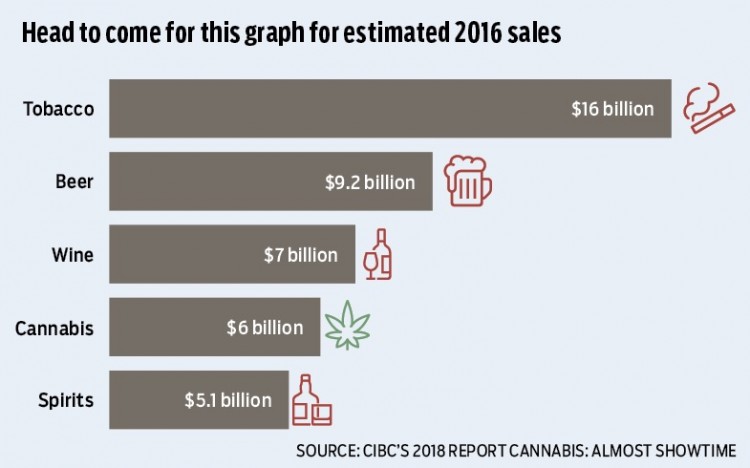 The licensed producer Tantalus Labs has thought about the prospect of overseas investments “extensively,” said CEO Dan Sutton. “There’s no doubt in my mind that in an ever-globalizing cannabis market, producers that want to be global cannabis firms will need to have production in various jurisdictions.”

He told Business in Vancouver he believes that if federal or provincial governments are unable to create a legal framework allowing domestic demand to be met by Canadian production alone, “there could be political pressure to allow for cannabis imports from lower-cost or better agricultural jurisdictions.”

Those imports would likely initially be funnelled exclusively into the medical-cannabis supply chain because imports for recreational purposes would break international treaties. Satiating medical-marijuana demand with imported cannabis, however, would free up local supply for recreational use.

Rhizo’s only cannabis exports to Canada have been genetic materials to Vancouver’s Anandia Labs for testing and research, although McMillan told BIV that Rhizo may look into obtaining its own licence to do future research in Canada. Aurora Cannabis today announced plans to buy Anandia for $115 million in shares and warrants.

He said government regulations written to go along with the Cannabis Act may allow medical-
marijuana exports to Canada. That is something that would help Rhizo, which has a joint venture partner that grows cannabis in Lesotho.

Canopy Growth Corp. (TSX:WEED) on May 30 announced a deal to buy Daddy Cann Lesotho PTY Ltd. for $28.8 million in shares.

Two days earlier, Aphria announced a $4 million investment to create a joint venture with South Africa’s Verve Group of Cos., which grows cannabis in Lesotho. Aphria’s pact with Verve arose from Aphria’s purchase of the internationally focused Nuuvera Inc. in March for $425 million.

Also in March, Supreme  Cannabis Co. Inc. (CVE:FIRE) invested $10 million in Medigrow Lesotho, and it aims to export cannabis oils to Canada and other countries.

“There is a good opportunity” for these companies, said Deepak Anand, vice-president of business development and government relations at the consultancy Cannabis Compliance Inc.

“The key is going to be whether Health Canada will let these imports happen to a licensed producer or not,” Anand said.

Anand said that until changes take place, the advantage for Canadian licensed producers in having African operations is that the foreign-grown cannabis can be sold to other nations, such as Australia and Germany, that allow for medical-marijuana imports.

If you are interested in learning more about opportunities in the cannabis sector, and hearing a panel presentation that Business in Vancouver is hosting on July 12, check out BIV's Business Excellence Series: Legalizing Cannabis at the Vancouver Club.•