Trevor Linden has "stepped down" as Canucks president of hockey operations: Aquilini

"This afternoon Trevor Linden stepped down as president of the @Canucks. He’s looking forward to pursuing other opportunities and spending time with his family," Aquilini wrote in the first installment of 12 tweets on the issue.

"I deeply value everything Trevor has done for this city and this franchise. He is tremendously popular in Vancouver, and for good reason. I thank him for helping us get to this point, and I wish him nothing but the best in his future endeavours," Aquilini wrote in a follow-up tweet.

In additional tweets, Aquilini announced that the team's general manager, Jim Benning, will "head up hockey operations and report directly to the ownership group."

Aquilini noted that Benning and head coach Travis Green "will continue rebuilding the team as per the plan we have in place."

One potentially revealing Aquilini tweet noted that "a rebuild is a long, slow, gradual process. Everybody needs to be united behind the same vision and pulling in the same direction."

The Canucks released a message from Linden that included him saying how it was a "difficult" day.

"I love this city and this province, and I will always have a special relationship with this team and Canucks fans," Linden said in the message.

Linden, who was a star player with the Canucks and has his No. 16 retired, got into business after he left playing hockey and before Aquilini recruited him to be in charge of the team's hockey operations.

The venture for which he is best known is the Club 16 Trevor Linden Fitness chain of gyms. He and business partner Chuck Lawson sold a 60% stake in those gyms to Calgary's Founders Advantage Capital Corp. (TSX-V:FCF) in 2016.

“There were multiple considerations that went into the decision [to select Founders],” Linden told Business in Vancouver in January, 2017, soon after the transaction closed. “Some are financial. Some are about philosophical alignment. Some are just the synergy that we have with that group."

“When you think about the checklist, this partnership really checked all the boxes. It was really one that allows us to move forward and continue building and growing and to maintain the culture that we’ve created.”

He and Lawson separately own franchise rights for the Lower Mainland for the fitness chain, Orangetheory Fitness.

(Update: One hour and 17 minutes after Francesco Aquilini's 4:47 p.m. tweet that Trevor Linden had "stepped down," he tweeted that he "misspoke," because his wording made it sound as though Linden is "a quitter." Aquilini then said that "we parted ways amicably.") 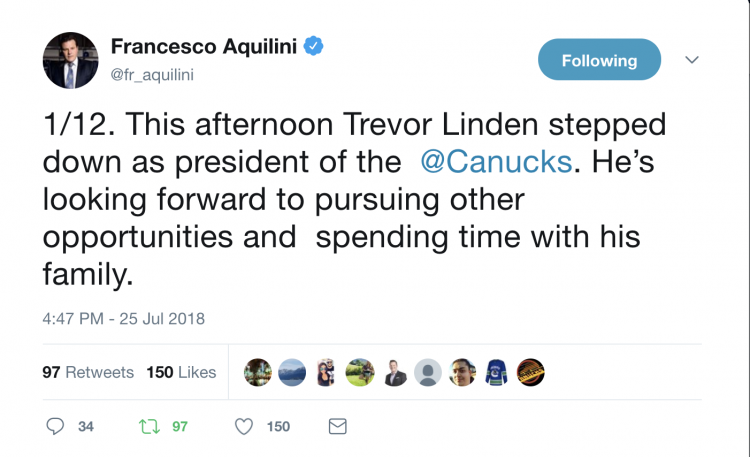 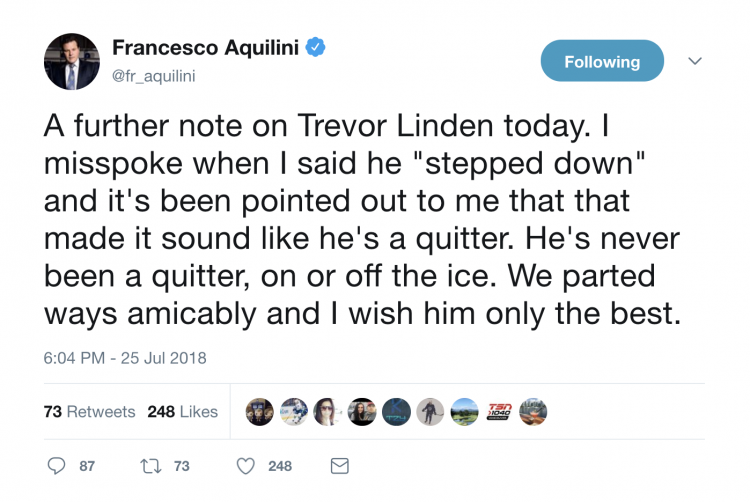