By Glen Korstrom | October 15, 2018, 8:08am
JAK Group CFO Mike McKee has paid B.C. government application fees on five of the eight stores that he plans to open | Rob Kruyt

Entrepreneurs eyeing the arrival of October 17, when Canada legalizes recreational marijuana, are frustrated with delays and government bureaucracy that have combined to ensure that B.C. will not have any privately run cannabis stores for months to come.

A single British Columbia Liquor Distribution Branch-run (BCLDB) cannabis store is slated to open in Kamloops on the day legalization takes effect, and the government has promised to have its e-commerce platform operational.

The BCLDB told Business in Vancouver in an email, however, that consumers should expect “reduced volumes and assortment of non-medical cannabis.”

That is because the four largest licensed producers that agreed to supply the BCLDB have said that they will not be shipping it their full product commitments by the deadlines set out in their supply agreements, according to the BCLDB.

Many licensed producers that intend to supply the recreational market face challenges such as licensing delays, crop failures, lower-than-expected harvest yields, a shortage of packaging, product scarcity owing to exports and general problems in the supply chains.

Private stores will have an even slower start.

As of October 10, government data showed that entrepreneurs had paid 173 application fees for retail licences across the province. Of the 111 paid applications that government workers deemed to be complete, only 62 have been forwarded to local governments or First Nations to approve.

None of those applicants have received conditional approval, much less had a licence issued.

“Some municipalities have decided that they will put it on the back burner,” said JAK Group CFO Mike McKee, who has paid the B.C. government fees for five applications and had three of those forwarded to municipalities for approval.

McKee said that a year from now, he would like to operate eight private cannabis stores, the maximum number the province allows any ownership group to operate.

“In Coquitlam, they’re going to wait until after the [October 20] municipal elections before they get down and deal with the issue,” he said. “Right now, there’s no real opportunity.”

Another challenge in some municipalities, he said, is that city councils have told him that they want the process to include spot zoning. That means that instead of allowing a cannabis store to simply open in a commercial area zoned for retail, that store would have to go through an additional rezoning process that includes public hearings.

“In a lot of areas, it is not going to be until spring or summer when you’ll see these types of stores opening up,” he said.

In contrast to McKee, who has never operated a cannabis store, many entrepreneurs have long operated dispensaries that federal law has deemed illegal.

Some of those people are slashing prices to liquidate merchandise and close so they can embark on a legal application, while others are shifting merchandise so that their stores sell only legal paraphernalia.

Weeds Glass and Gifts owner Don Briere told BIV that he will either close his stores in Kamloops, Williams Lake, Sechelt and North Vancouver or temporarily sell only accessories before fully closing them and applying for legal licences. 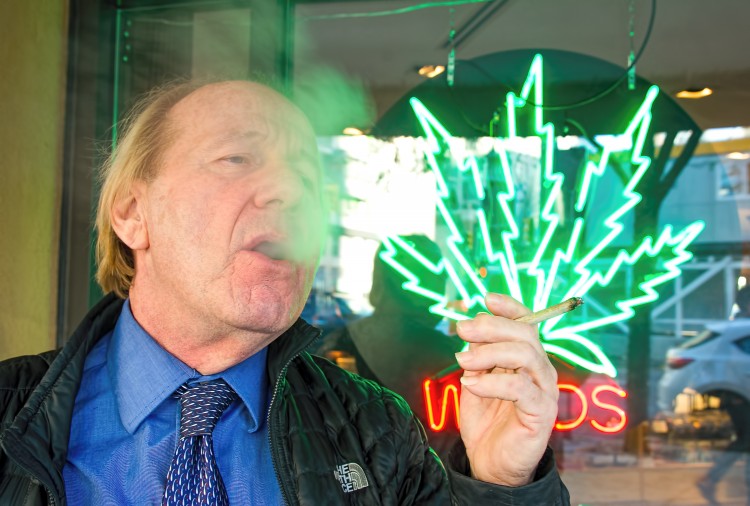 (Image: Weeds Glass and Gifts owner Don Briere samples some of his product outside one of his stores | Chung Chow)

He will keep his four Vancouver stores open pending the outcome of a petition against the City of Vancouver in BC Supreme Court that involves dozens of dispensaries, and also includes provincial and federal attorneys general as participants.

The dispensary petitioners argue that city and federal laws unconstitutionally limit reasonable access to medical marijuana and that the city therefore has no jurisdiction to issue licences.

“They are completely, totally ill-prepared,” Briere said of governments at all levels. •