By Glen Korstrom | October 30, 2018, 8:08am
Lululemon's flagship store in Metro Vancouver is at the corner of Robson and Burrard streets | Chung Chow

Vancouver-based yoga-wear giant Lululemon Athletica Inc. (Nasdaq:LULU) is stretching operations around the world and holding its position for continued growth in a rollout that is proving more successful than the company’s early global expansion attempts.

In that original bid to expand beyond Canada and the U.S., the company opened franchised stores in Australia in 2004 and Japan in 2005, but they struggled. Lululemon then bought out its franchisees and shuttered most overseas locations in 2008.

Recent expansion, in contrast, has been substantial and accomplished almost exclusively through corporately-owned stores.

Lululemon owned 404 stores in January, with 70 of those locations in 10 countries outside Canada and the U.S. It separately had licensee agreements with partners operating three Lululemon stores in the Middle East and one in Mexico.

That international footprint is more than double that of three years earlier, when there were 34 corporately-owned stores and no franchises outside Canada and the U.S.

“We have a real big opportunity internationally, in particular in Asia,” said Lululemon CEO Calvin McDonald in August, weeks after he was hired.

The 20-year-old company generated about US$2.5 billion in sales last year and is projecting that sales will increase to US$3.1 billion this year.

Its market capitalization is more than US$18 billion, thanks to its shares trading at more than US$136 apiece – up more than 120% compared with a year ago. By most metrics, the company is firing on all cylinders.

This success and the company’s international expansion prompted Cannacord Genuity on October 24 to upgrade its rating for Lululemon to ‘buy’ from ‘hold’. This is a significantly more bullish outlook on Lululemon from Canaccord analyst Camilo Lyon, who reiterated a ‘sell’ rating on the company in August, 2017, just before Lululemon’s share price started to soar.

Lululemon plans to add 40 stores during its current fiscal year but it has not specified how many of those stores will be outside Canada and the U.S.

And while the international market is growing fast, it remains a small slice of the company’s sales.

The U.S. is the company’s largest market, with about 70.8% of sales in its most recent quarter. Canada generated almost 17.2%, while the rest of the world accounted for 12%. 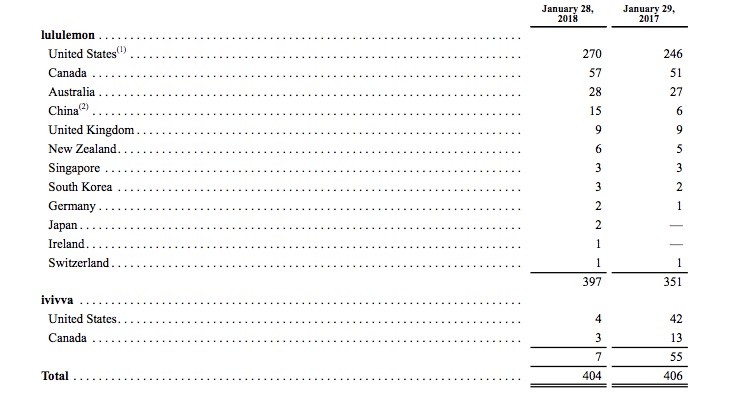 Australia is the company’s largest market outside Canada and the U.S., while other stores are in New Zealand, the U.K., Ireland, China, Hong Kong, Singapore, South Korea, Germany, Puerto Rico, Switzerland and, as of this summer, Sweden.

Lululemon chief operating officer Stuart Haselden said during an August conference call that Asia is the company’s focus for future international stores because sales growth has been spectacular. Comparable store sales in Asia increased 50% in the quarter that ended July 29, compared with the same quarter a year ago.

“In China, our e-commerce business continues to lead the way,” with a year-over-year comparable sales increase of over 200%, Haselden said. (He did not reveal the dollar value of those sales.)

“We launched our WeChat store in China in [the second quarter] and remain on track to launch e-commerce sites in Korea and Japan later this year.”

Comparable year-over-year sales growth in Europe, while strong, was much less than in Asia, Haselden said during the call, which followed Lululemon's most recent quarterly earnings.

“We still have much work to do in this region,” he said. “We opened our first store in Sweden, and a key destination city of Stockholm. And in London this quarter, we hosted another successful Sweatlife Festival in which we partnered with 13 studios to offer over 250 classes and attracted over 4,500 guests.”

“I felt that their rules around hiring, firing, lunch breaks, vacation, cost of benefits and the threat of legal ramifications created mediocrity at the retail level in Europe,” he said. 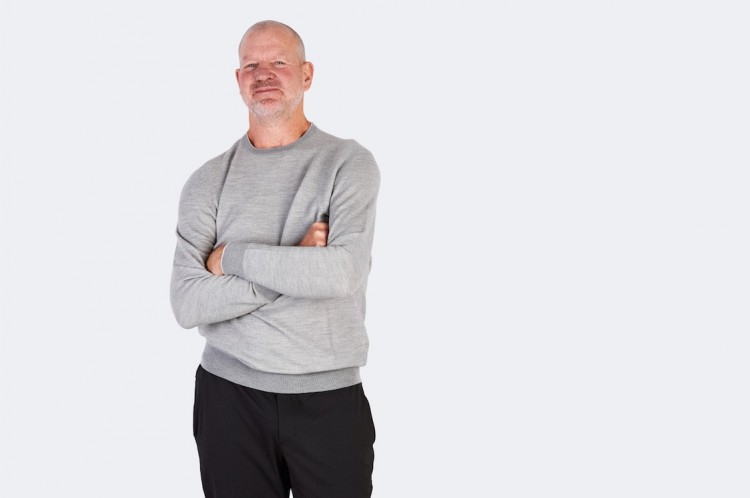 Back in October 2004, when Wilson first launched expansion outside North America, he selected Melbourne, Australia, as the debut location partly because Australians’ active and outdoor-oriented culture paralleled that found on North America’s West Coast.

He also saw Australian expansion as a way to avoid having to discount clothing at the end of each season. Wilson thought he would be able to move end-of-season winter goods to Australia at the beginning of its fall season, and vice versa, and charge full price.

Wilson told Business in Vancouver that this strategy failed because an international treaty regulated what he called “transfer pricing,” and ensured that businesses could not undervalue and dump products.

He owned half of that first Australian franchise, and that stake was later reduced to 20% by Lululemon’s board – a move he called a mistake.

“The Australian franchise floundered because it was operated from a finance point of view and not from a winning-formula, culture, leadership point of view,” Wilson said.

Lululemon’s second overseas store was in Tokyo, where Wilson sold a franchise to Kano Yamanaka, who had been Wilson’s Japanese distributor when Wilson owned a previous business, Westbeach.

“We had one store there, but he didn’t have the financing to build out more stores.”

Wilson bought out Yamanaka’s franchise agreement and launched a joint venture with the large Japanese company Descente, which then opened a few more Japanese locations.

By February 2008, Lululemon operated four stores in Japan through that joint venture, and three franchised stores in Australia, according to Lululemon’s 2008 annual report.

The severe economic downturn later that year forced Lululemon to close all of its Japanese stores and to provide almost AU$4 million in loans to its Australian franchisee, who was stretched thin.

“We ended up with stores that were two storeys – main floor and a second floor,” he said.

“[The stores were also] without the training and development that we had at Lululemon that was critical to make the business model work.”

That original model for training and development was an essential part of Lululemon's compelling culture, he explained.

Wilson first relinquished the CEO position to Bob Meers, in the lead-up to Lululemon’s July 2007 IPO, and then to Day.

Wilson, in his new book, tosses brickbats at both CEOs – and at Laurent Potdevin, who followed Day in the CEO’s chair – saying they failed to provide the leadership the company needed.

And while Wilson, in his book, sounded positive about Lululemon in August hiring McDonald, a former Sephora executive, because McDonald is an athlete, he was less enthusiastic about the CEO when he spoke with BIV.

Yet despite potential differences with McDonald, Wilson, who owns 13.5% of Lululemon, said that he has a “pre-approved” seat on the company’s board of directors and he may decide to rejoin the board.

“Now’s the time for me to choose whether I want to go back on the board or not,” he said.

He told BIV that he is in agreement with the company’s plan to focus on China for international expansion but he sees challenges ahead.

“The big opportunity is China and Lululemon is just trying to go in there as another retail store among many,” he said.

“The board of directors doesn’t really understand what differentiates the product.”•