By Glen Korstrom | November 14, 2018, 9:09am
Dosist, which has a Canadian headquarters in Vancouver, sells millions of dollars worth of its vape-pen products in California | Glen Korstrom

Canada’s rules around cannabis vaping are frustrating entrepreneurs and putting consumers’ health at risk, according to those in the industry.

The federal and provincial governments allow people to own cannabis concentrates meant for vaping and to vape cannabis concentrates, yet federal law bans businesses from selling those concentrates. A change in those laws is expected sometime next year as part of regulatory revisions that also legalize consuming edibles and cannabis-infused drinks.

Health Canada’s only exception to that rule, so far, has been its permission for Aurora Cannabis Inc. (TSX:ACB) to sell a vape concentrate that is high in the cannabinoid cannabidiol (CBD) and low in the psychoactive cannabinoid tetrahydrocannabinol (THC).

The government likely made the exception because the company’s CBD vape cartridge has a high concentration of CBD and a low concentration of THC, Aurora’s director of investor releations, Rob Kelly, told Business in Vancouver.

“We do not make the vape pens,” he said. “However, the cartridge is compatible with most common third-party vape pens currently available.”

All of these vaporizers are different from the vape cartridges that people use to vape a nicotine-laden, water-based solution often called e-juice. Vaping cannabis concentrates in vaporizers meant for e-juice would gum up the inside workings of the devices, according to those who sell the devices. 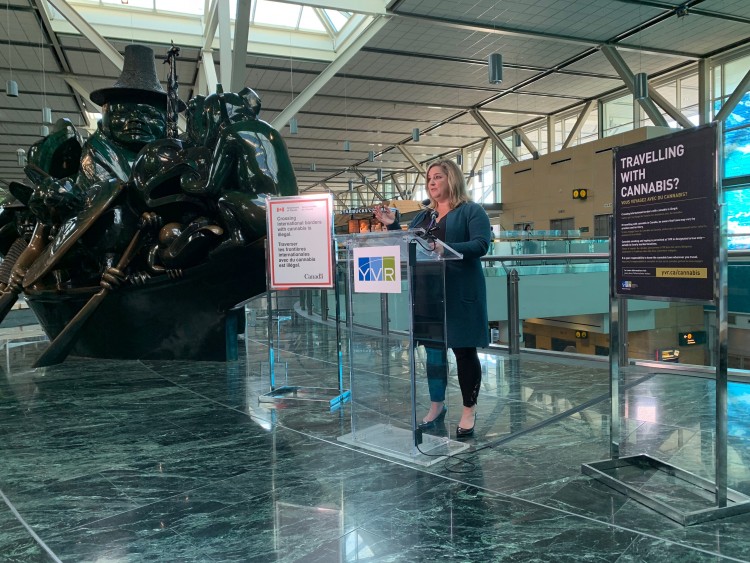 (Image: Vancouver Airport Authority vice-president of operations and maintenance Robyn McVicker tells media that travellers are allowed to vape cannabis at the airport as long as they do it in designated areas outside the terminal | Glen Korstrom)

People who own black-market vape sticks with attached cannabis-concentrate containers can use them openly, and businesses such as the Vancouver Airport Authority have pamphlets and signs encouraging people who want to vape cannabis to do so in designated areas.

His company’s Canadian division is based in Vancouver but can’t conduct sales here because its vaporizers come with cannabis concentrate incorporated into the devices.

Users inhale and get a 2.25-milligram dose of the concentrate when they vape. Once a Dosist vaporizer is empty, it can be recycled but can’t be refilled by the user.

Dosist generates millions of dollars’ worth of annual sales from transactions in California, according to Campbell.

“We’re incredibly pleased to see how consumers flock to our product in California and, as a Canadian, I’m disappointed that other Canadians need to come to California to purchase our products,” Campbell said. “It’s frustrating. It doesn’t give Canadians the best-quality products and it doesn’t allow them to control the dosage that they are taking.” 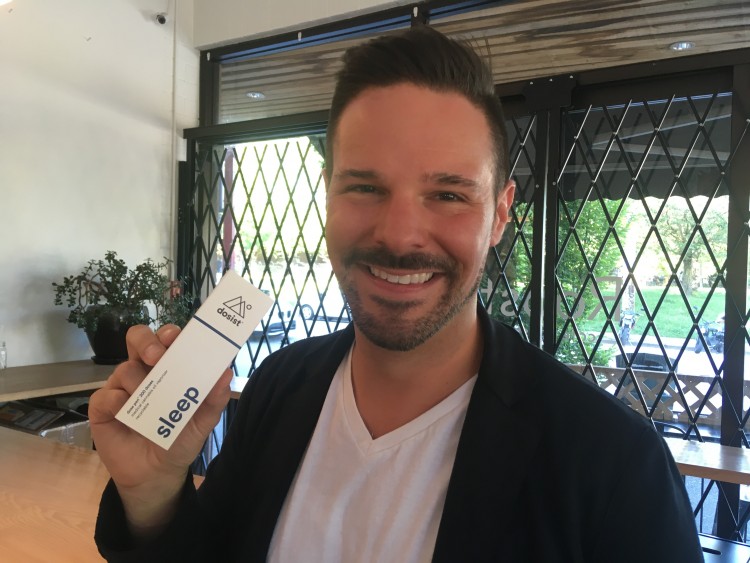 (Image: Dosist president Josh Campbell holds up a box with one of his vape pens at an event in East Vancouver in summer 2018 | Glen Korstrom)

Canadians who use black-market vape pens that have concentrate attached are risking their health because there is no government oversight, BlissCo production manager Shawn McDougall told BIV during a tour of his company's boutique Langley facility.

“In an unregulated market, most vape-pen manufacturers have been using mediums [in concentrates] that are not recommended for smoking,” he said.

Consumers are also at risk, he said, if they try to refill their vape cartridges with legally available THC-laden cannabis oils that are not meant for vaping.

Some legal THC-laden oils on the market are labelled for sublingual (under the tongue) use. Others, mostly for women, are for use on genitals and are touted as being aphrodisiac oils, which increase blood flow to an area and inhibit pain.

“When we make the tincture, which is a sublingual drop, we add MCT [medium-chain triglyceride] oil as a carrier oil,” McDougall said.

He added that other mediums, such as glycol, are also added to oils to provide viscosity but are not healthy to vape.

When the Canadian government legalizes THC-laden concentrates that are meant to be vaped, BlissCo will make those concentrates and use no ingredients outside of what was originally in the cannabis flower, said McDougall.

“In the next five to 10 years, when doctors start seeing people with lung issues – popcorn lungs [damage to airways] – you’ll have to thank the vape industry for that,” McDougall said. “It’s not that vaping is bad for you. It’s the fact that it has been unregulated. That’s the only thing that is bad.”

Frey Garabagi, vice-president of research at Emerald Health Therapeutics Inc., agreed that vaping cannabis oils that are intended for other forms of consumption could be dangerous.

“Emerald’s cannabis oils are formulated in MCT and are strictly meant for ingestion,” said Garabagi, who has a PhD in molecular genetics.

"We do not recommend the use of these oils with vaporizing devices. The high temperature that vaping devices reach result in the production of harmful compounds such as formaldehyde and acetaldehyde, especially when inhaled at high doses.” •