Revenue stems from excise and other levies

By Glen Korstrom | June 19, 2019, 4:36pm
Dispensaries such as this one on Burrard Street continue to flourish despite not being provincially licensed | Glen Korstrom

The federal and provincial governments generated $186.1 million in tax revenue from cannabis sales between October 17, when recreational cannabis sales became legal, and the end of March, Statistics Canada revealed June 19.

That tax revenue comes from the 10% excise tax that is placed on all sales plus either the 5% goods and services tax (GST), or the 13% or 15% Harmonized Sales Tax (HST), depending on the province or territory where the product is purchased.

The B.C. government’s most recent tally of money that it has received from the federal government’s 10% excise tax is $3,394,993.40, with that money being generated between October 17 and December 31. It has not yet revealed how much it received in the first quarter of 2019. 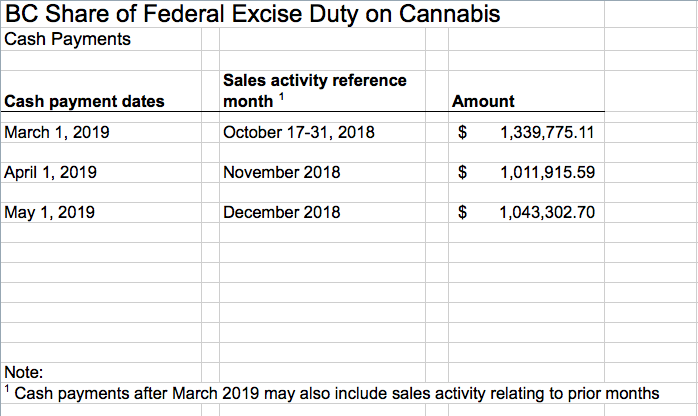 The B.C. government’s first-ever projection of its cannabis revenue was made in February 2018, when it said that it expected to generate $50 million in revenue in the 2018-2019 fiscal year, which ended on March 31. That initial projection forecast that in each of the 2019-2020 and the 2020-21 fiscal years the B.C. government would generate $75 million per year.

The B.C. government then did a dramatic downsizing of those projections.

Instead of providing a forecast for cannabis revenue in its most recent budget, the B.C. government combined projected revenue from cannabis excise taxes with revenue from federal payments under what it calls Disaster Financial Assistance Arrangements.

Then, without making any public announcement, the B.C. government quietly started once again making projections for expected revenue from cannabis.

One thing that is clear is that those projections are far below what was originally forecast in early 2018.

B.C. is not alone in downsizing its projections, however, as the same thing is happening across the country, as sales have been on decline, according to Statistics Canada.

“The numbers have been lower than expected, thanks in part to the bumpy rollout of legalization last fall,” said Conference Board of Canada economist Robyn Gibbard.

“We think that as the kinks are worked out, governments can expect strong growth in revenues from cannabis sales going forward,” Gibbard added.

The $186-million figure that Statistics Canada revealed June 18 captures only tax revenues and does not include additional government earnings from the crown corporations in charge of retail and wholesale sales, Gibbard noted.

Statistics Canada numbers also show that cannabis sales on the black market dwarf legal sales, with $377 million worth of legal products sold in the first quarter of 2019 compared with about $1 billion in sales for black market products.

Gibbard believes that there are two more reasons for governments to be optimistic about future revenues: some provinces have yet to fully roll out retail stores, and edible cannabis products are set to become legal as of October 17, with products in stores as early as December 16.