Keeping Canada’s waste in its residents’ backyards isn’t just the ethical thing to do; it can be good for the economy

When governments ban the disposal of certain items from landfills, it can have unintended consequences – illegal dumping, for example. But it can also kick-start new business ventures, especially if the bans coincide with extended producer responsibility programs.

Here are a few examples of new businesses in Canada that have found novel ways of turning waste into valuable products and creating jobs. 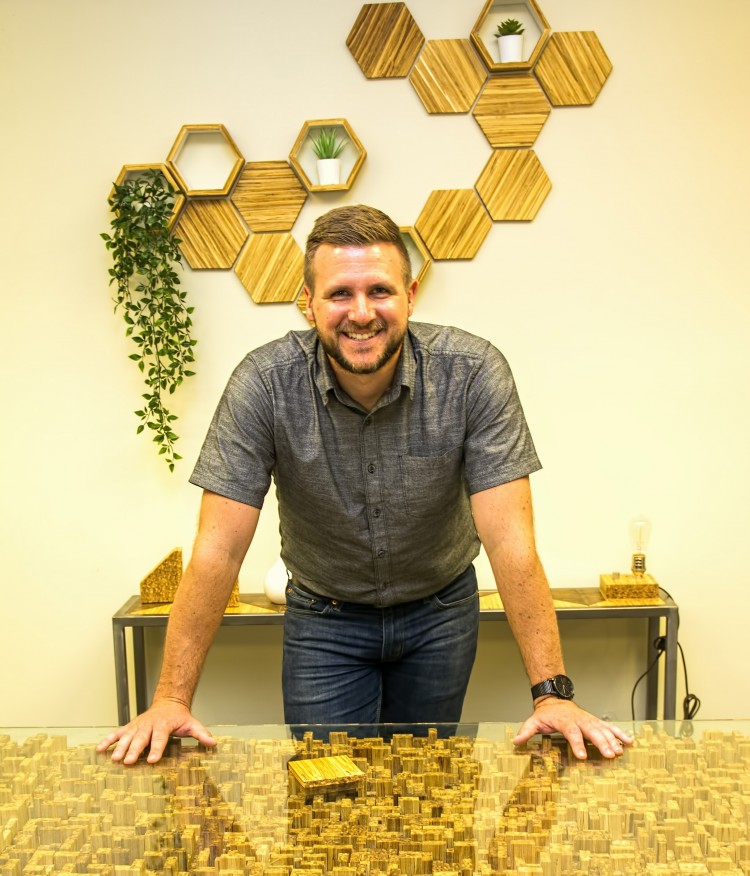 Prior to 2016, roughly 217 million chopsticks and other wooden utensils ended up in Lower Mainland landfills or at organic waste recyclers each year.

But ChopValue now takes some of the estimated 18 million discarded chopsticks – 350,000 to 400,000 per week – and turns them into engineered wood products.

“We are such a tangible example within the circular economy movement,” said founder and CEO Felix Böck, who has a PhD in wood engineering. “What others see as neglected waste we turn into a viable concept.”

Starting with one shop in Vancouver in 2016, ChopValue now has four, including one that will soon open in Los Angeles. ChopValue now employs 28 people.

ChopValue collects the chopsticks from restaurants, malls and Vancouver International Airport and turns them into tabletops, engineered wall panels, wall decor and other assorted knick-knacks.

“We are expanding our microfactory concept as a franchise model,” Böck said. “Every city we expand to, we have the recycling program, the manufacturing and the product distribution in one place so that everything is made local.

“We are expanding, with a franchising concept, to around 50 to 75 locations over the next three years.” 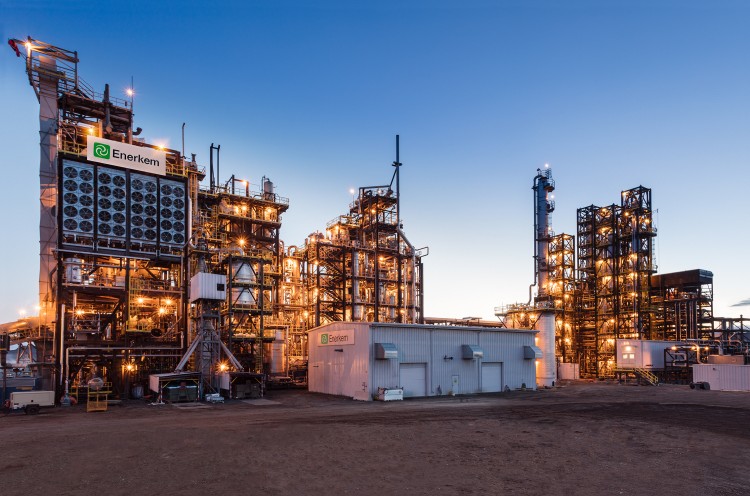 Enerkem turns 100,000 tonnes of waste into biofuels at its Edmonton plant. | Submitted

This Montreal-based clean-tech company developed a gasification process for turning non-recyclable waste into methanol or ethanol, which can be used as a fuel additive to meet low-carbon fuel standards.

It built its first commercial gasification plant in Edmonton and has plans for other commercial plants in Quebec, Rotterdam and Barcelona.

“What we’re doing in Edmonton is we’re converting the fraction of waste that is non-recyclable and non-compostable,” said Michel Chornet, Enerkem’s vice-president of projects and operations.

The Edmonton plant was financed largely through private investment, although the federal government contributed $3.5 million. In April, Enerkem raised $76.3 million. Suncor Energy Inc. (TSX:SU) was one of the investors.

The Edmonton plant is run as a profit-making business, with the City of Edmonton paying Enerkem a tipping fee to take its waste, which is then refined through a gasification process into methanol or ethanol. 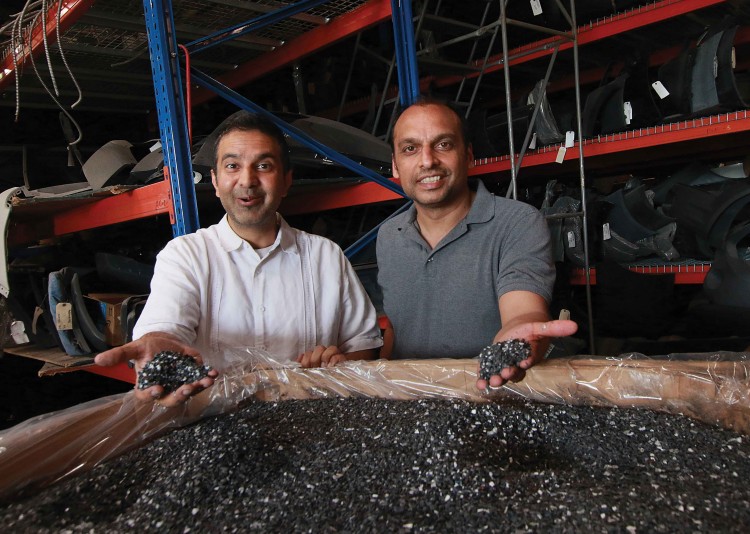 This Burnaby company is a good example of a new business arising out of necessity. Initially, the company focused only on the “reuse” part of the “reduce, reuse, recycle” equation by rehabilitating plastic car bumpers, which were then sold to auto body shops.

But only 5% of the bumpers were rehabilitated. The rest were sent to China. However, when China started slamming the door on some recycled plastics, the company suddenly had a growing stockpile of car bumpers that could have ended up in the landfill.

Al Boflo and his partner Bash Jamal saw the Chinese ban on plastic imports as a new business opportunity and invested in machinery that cuts the plastic into small pieces. It is then sold to buyers in Canada and the U.S.

“We’ve been able to create this new revenue stream and new opportunity for our business dealing with plastics that used to just get baled and sent to China,” Boflo said.

Jamal estimated that in approximately a week and a half, the company processed 2,000 bumpers.

“You can just imagine what 2,000 bumpers look like in a landfill.”

The company, which employs 15 people, gets most of its bumpers from Lower Mainland body shops, but it’s now looking to expand into other B.C. communities and other types of plastic recycling. 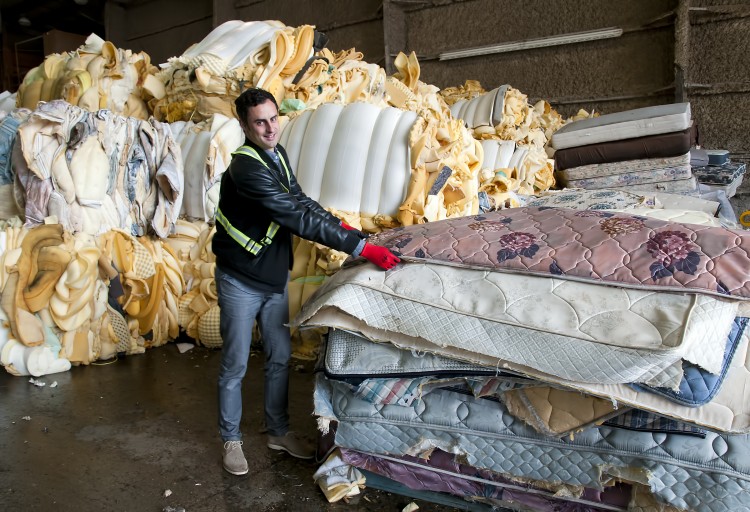 Fabio Scaldaferri has invested $5 million in a mattress and furniture recycling business in Hope. | BIV

The company recently invested $5 million in a new plant in Hope, $2 million of which was for automated sorting machinery.

Many of the materials that are recovered are sold to buyers in Alberta and northern California. Some is bought by flooring manufacturers.

Because its sorting is now fully automated, Mattress Recycling can also accept textiles and non-recyclable plastics. Waste that can’t be recycled is sent to the Lafarge (TSX:LAF) cement plant in Richmond, which has reduced its use of coal and natural gas in its kilns by burning non-recyclable waste.

Mattress Recycling currently recycles 75,000 mattresses per year, which is a fraction of the mattresses that are thrown out every year in B.C.

Metro Vancouver now prohibits mattresses from being discarded in landfills, but they can still end up in dumps outside of the Metro region.

Mattress Recycling’s co-founder and CEO, Fabio Scaldaferri, said landfill bans on certain items is a good first step in creating business opportunities for companies like his, but he added that the current funding model means the taxpayer ultimately pays for disposal.

“The municipalities end up spending massive amounts of money on the bill to us.”

Scaldaferri said a better system would be to extend B.C.’s EPR program to other consumer products, like furniture and mattresses, which would mean that producers and consumers – not the general taxpayer – would ultimately pay for disposal and recycling.

“We’d be able to divert even more material.”

Scaldaferri added that an EPR program for mattresses in California has resulted in 1.1 million mattresses per year being diverted from landfills.