Shares in Nanaimo-based Tilray Inc. (Nasdaq:TLRY) fell more than 10% after hours on August 13, after the cannabis producer revealed that it lost more than analysts expected in its second quarter, ended June 30.

The company, which is well known for having a volatile share price, saw its shares jump more than 8% during the regular trading session.

Analysts had expected that the company would lose US$27.3 million, or 28 cents per share.

The loss stemmed from what the company said was an increase in operating expenses for “growth initiatives,” interest expense from convertible notes, the acquisitions of the Manitoba Harvest and Natura businesses, and the expansion of international operations.

The good news for Tilray is that its revenue, at US$45.9 million, was higher than the US$40.3 million that analysts had expected. It was also a 371.1% jump in revenue, compared to the second quarter of 2018.

Tilray chalked up the revenue hike mostly to it buying Manitoba Harvest, Canada legalizing cannabis for recreational users and sales growth in its international medical-cannabis markets, particularly in Europe.

The US$45.9 million that it announced for revenue, however, includes about US$3.9 million in excise tax, which the company obviously must provide to governments.

“We are pleased with our second-quarter results and strong business momentum,” said Tilray’s CEO Brendan Kennedy said in a release.

“Our team has executed against our plan, with adult-use revenue nearly doubling in the second quarter compared to the first quarter and gross margin increasing sequentially for the second quarter in a row. As we continue to grow, we remain focused on our long-term strategic objectives and deploying capital to maximize stockholder value.” 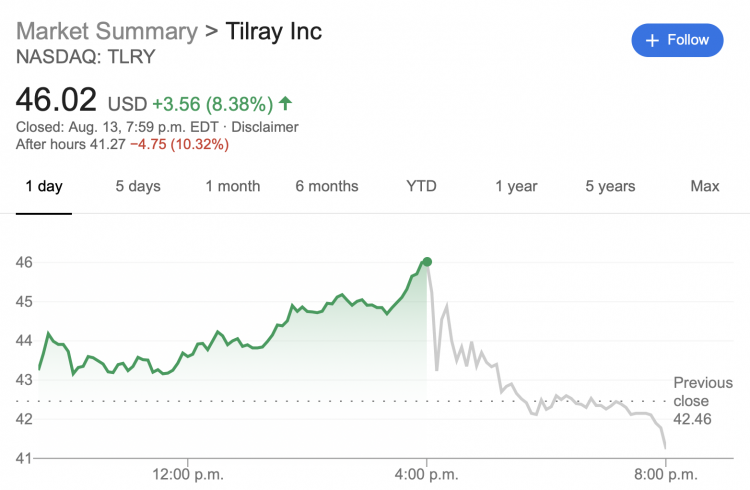 Tilray is likely best known to many investors for its dramatic initial public offering on July 18, 2018, when shares first sold for US$17 apiece.

Steady gains then pushed shares to close on September 19, 2018, at US$214.06 – a value that worked out to be a 1,159% return in the company’s first two months of trading. Its market capitalization sat at more than US$19 billion. Shares continued to rise until they hit the magical US$300 mark.

The volatility was in part because Tilray had a relatively small number of outstanding shares – 17.8 million. More shares were available to trade starting 180 days after its IPO, when a lock-up period expired.

Seattle's Privateer Holdings, however, continues to own a majority of the company's shares. One event that Tilray said in its earnings release was a "business highlight" during the quarter was signing a letter of intent with Privateer to extend a lock-up of its 75 million Tilray shares for up to two years to provide for the shares' orderly release.

Tilray shares on August 13, before the securities started tanking after hours, closed at US$46.02, which is far from the company’s US$300 52-week high. The share price was also, however, significantly more than its 52-week low of US$24.