Lululemon beats expectations for sales and profit in second quarter; shares up

Yogawear giant generated US$883.4 million in sales – up 22% from same quarter a year ago

By Glen Korstrom | September 5, 2019, 2:48pm
A prominent Lululemon store in Vancouver is at the corner of Robson and Burrard streets | Glen Korstrom

Why it matters: Lululemon is the largest retailer listed on public markets that is based in B.C., and it bases hundreds of workers in the region.

The Vancouver fashion giant generated nearly US$125 million in profit on nearly US$883.4 million in sales during the quarter that ended August 4, the company announced after markets closed on September 5.

Its earnings per share worked out to US$0.96, which was US$0.07 more than analysts had expected. Revenue was US$38.32 more than expected. 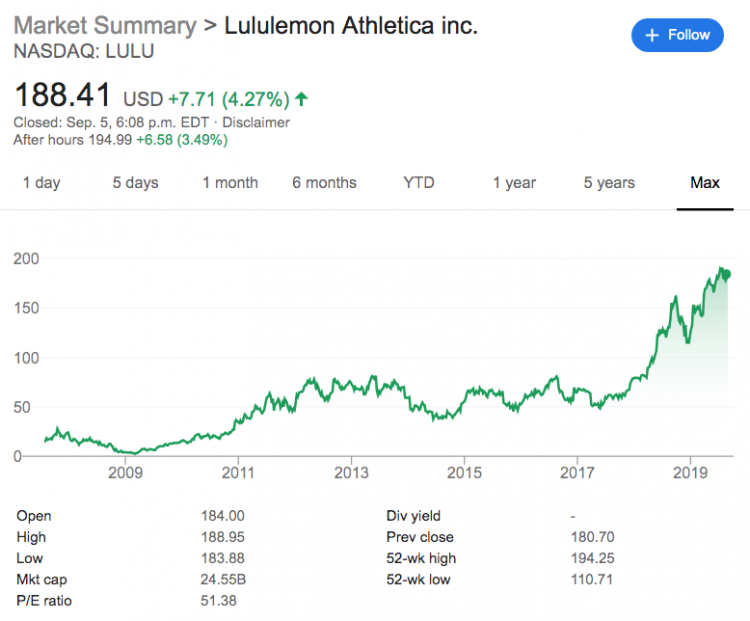 Business in Vancouver last year explored Lululemon's current and past international expansion, and how the company struggled when founder Chip Wilson made a first attempt to expand abroad.

More recent expansion has proved to be a success and Lululemon CEO Calvin McDonald reiterated that on the company's September 5 conference call.

The Asia Pacific region was one that he zeroed in on.

"In our [Asia Pacific] APAC region, the momentum continues to be driven by strength in both our store and online channels," he said. "Total revenue in APAC grew 33% in Quarter 2 with particular strength in China, where we saw market growth of 68%. We opened two new locations in China and our fourth store in Singapore, with our Marina Bay location."

He said that Lululemon is "in the early stages of our growth potential" and that it is on track to open approximately 15 stores in China this year – almost doubling its store count when compared to the end of 2018.

"Our new local market [e-commerce] sites in Korea and Japan are exceeding initial expectations," he said.

Lululemon expects that it will continue its global sales-growth momentum in its third quarter, when sales are projected to be in the US$880-million to US$890-million range, based on a total comparable sales increase between 10% and 14% on a constant dollar basis. Diluted earnings per share are expected to be in the range of $0.90 to $0.92 for the quarter.

Overall sales for the current fiscal year are forecast to be between US$3.8 and US$3.84 billion.