By Glen Korstrom, Chuck Chiang | November 12, 2019, 8:08am
Rubicon Organics CEO Jesse McConnell, shown here working in his greenhouse, would have concerns about his plants’ biological safety were the facility open to the general public  | Rob Kruyt

Cannabis-related tourism, or canna-tourism, is a niche in the cannabis sector that has a way to go to take shape as the legal cannabis industry evolves.

After Canada legalized cannabis in October 2018, many businesses started to realize that cannabis culture’s social element, similar to that of alcohol, makes the drug a natural counterpart for tourism ventures.

That upped efforts to encourage the province to change laws to allow consumption lounges and farm-gate sales at production facilities to create attractions that would draw a new demographic of tourists to B.C.

“It’s the logical next step of how people will want to socialize around cannabis, because at this moment there is no law that allows people to consume together in a public environment, which doesn’t make sense,” said Mark Goliger, CEO of the cannabis retailer National Access Cannabis (TSX-V:META).

He equates the ban on consumption lounges to the government forbidding restaurant owners to serve alcohol.

Solicitor General Mike Farnworth, however, is steadfast. He said that he has no plans to legalize consumption lounges because public health officials have warned him that the lounges could increase risks to consumers’ well-being.

“There are no plans at this point,” he told Business in Vancouver. “It may be [allowed] in the future, but there are a lot of issues with the medical health officer. There are workplace issues. There is a lot of public-policy work in those areas that has to be dealt with.”

Farnworth said as recently as last month, however, that he is amenable to legalizing farm-gate sales, or sales in stores attached to licensed producers’ (LPs) facilities. He would not provide a timeline for any legal changes.

Jesse McConnell, co-founder and CEO of cannabis producer Rubicon Organics (CSE:ROMJ) said that his company and other LPs are likely to support being able to sell their products directly to visitors at their farms. After all, that is what happens with wine in the Okanagan Valley. He might even sell seedlings or clippings at the farm gate if Farnworth changed the law to allow those sales, although he said that LPs are very protective over proprietary cannabis strains so the small plants that he would sell would have to be widely available cannabis strains.

The main products that he would want to sell at the farm gate would be his company’s proprietary strains of cannabis in dried-flower form.

“You spend a lot of time building up your genetic profiles, going through breeding programs and trying to get that strand that’s perfect for a certain type of consumer,” he said.

One of McConnell’s biggest concerns with having production-facility tours is that visitors could trek in germs or viruses that could harm plants. Facilities that have let media tour inside have required visitors to put on hairnets and shoe coverings as well as to step into a disinfectant before entering the facility.

BIV last year provided an in-depth look at what it is like to tour a cannabis growing facility.

The upside of farm-gate sales, McConnell said, is that it could be cheaper to run, with fewer administrative costs, than creating a separate retail operation. The result is that it would be a boon for smaller producers.

For Keenan Hall, the interest from tourists is already in place. Hall, owner and co-founder of the tour company The Movement Cannabis Tours, said he has already contacted several LPs to discuss whether they would be willing to host tours if or when farm-gate sales are legalized. 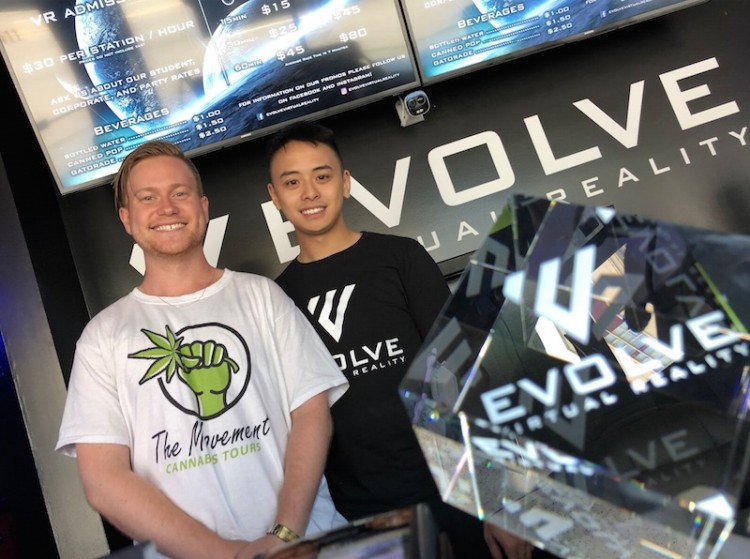 Hall added that other aspects of cannabis tourism should not be overlooked. Since late last year, his company has already provided guided, walking tours that have a cannabis focus. Things started slow, with The Movement providing one or two tours per month, but his business has trended up sharply so far this year. During the summer, he provided tours weekly.

Hall added that as guests learn more about the legalized cannabis industry, they feed into what he considers the greater business ecosystem.

“Cannabis tourism is going to be one of the most important aspects or segments to the industry in the future,” he said.

“We touch on almost every point of the entire industry. It’s a symbiotic relationship between the tourism sector and the rest of the industry. As they grow, we have more experiences to offer our guests. And as we grow, we can provide better access [to the public] for the rest of the legalized industry.”

One of the signs of that symbiotic relationship can already be found, surprisingly, on a golf course in Ontario.

Rolling Greens, located in Smiths Falls, became the first cannabis-friendly golf course in North America this year when it opened its doors under its new business format. Since officially opening for the season in May, the course has received media attention from as far away as Japan and Germany, and there are already plans to incorporate a Murray Bros. Caddyshack restaurant into the clubhouse. The course could also host a Cannabis Cup celebrity tournament later this year, director of entertainment Gordon Weiske told BIV.

“Everybody was asking, ‘Was this for real?’” Weiske said, noting the cannabis-focused tourism interest is coming at a time when many public golf courses are failing and have falling visitor counts.

“Our goal is for this to be a major tourism destination, and we’ve already seen a huge influx of people wanting to travel and golf.”

He added that some guests have come from as far as Montreal – just so they can smoke and play on the golf course.

Weiske said Rolling Greens’ model can work across Canada, including locations in B.C., and that officials will be looking at opportunities to come west in the coming years.

One key challenge that remains for the industry, however, is the lack of these facilities’ ability to actually serve visitors cannabis.

Hall said that it is against provincial law for The Movement to take guests to places specifically so they can consume cannabis. So, in order to stay compliant, he said that the tours could take breaks, or time-outs, when guests are in public areas. Guests could then act freely outside the tour for 15 to 20 minutes, and then continue with the tour group to go to places such as Evolve Virtual Reality. Evolve is a virtual-reality lounge where visitors don headsets and play games or otherwise get immersed in virtual reality.

Having consumption lounges legalized, Hall said, would be a crucial step in taking Canadian cannabis tourism to the next level.

“That’s the biggest limitation on us right now,” he said.

“In the fall, when the rain comes, [the lack of consumption lounges] does complicate our abilities to provide an experience worthy of Vancouver’s amazing industry and history with cannabis. So it’s the key.” •