By Glen Korstrom | March 27, 2020, 11:57am
Vancouver Airport Authority CEO Craig Richmond on March 17 speaks at a news conference at his airport, in front of the Spirit of Haida Gwaii sculpture by Bill Reid | Glen Korstrom

What happened: Vancouver Airport Authority (VAA) CEO Craig Richmond told Business in Vancouver that more than half of the approximately 26,500 workers at Vancouver International Airport (YVR) have been laid off. His authority has also halted construction at the airport, throwing an additional 2,000 on-site construction workers, and 2,000 off-site construction employees, out of work. The cuts are a direct effect of the COVID-19 pandemic.

Why it matters: YVR is an engine of the regional economy, helping facilitate $20.2 billion in total economic output and $10.4 billion in total GDP across, according to its operator, the VAA.

VAA's CEO, Craig Richmond, told Business in Vancouver March 27 that more than half of the approximately 26,500 workers at YVR have been laid off. The vast majority of those workers will be eligible for federal Employment Insurance, and top-ups such as the B.C.'s government's program to provide a one-time $1,000 payment.

None of his authority's approximately 500 employees have yet been laid off and he said laying off his own staff "is not contemplated at this time."

One reason he has not yet laid off any of his staff is that "it really doesn't matter how many passengers there are, there are many functions that just have to keep going."

The COVID-19 pandemic has ground passenger traffic to a near halt, prompting layoffs at many companies and airlines that are based at the airport. That includes everyone from baggage handlers to food-court employees to ticketing agents.

VAA had been underway with ambitious expansion that required around 2,000 construction workers to build new parkades, an expanded terminal and other upgrades. Richmond said construction is halted and they have been laid off, as have about 2,000 others who were working off-site, such as form workers. 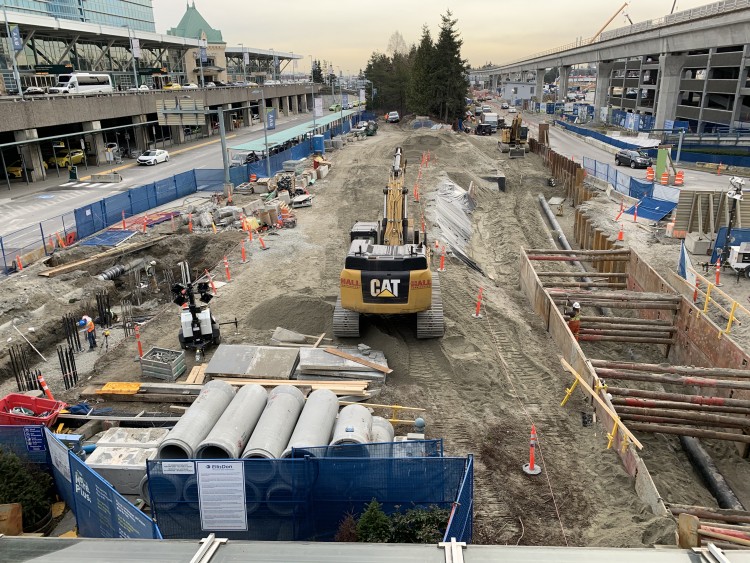 (Image: Construction at Vancouver International Airport on March 17 is visible from a walking bridge that connects the international terminal to the Canada Line | Glen Korstrom)

He has halted his own hiring for all but "critically needed" roles for the foreseeable future, and has redeployed some of his own workers to be doing different tasks.

"Maybe your job in accounting has changed, or maybe someone in finance can take a turn in operations," he said. "We're keeping people gainfully employed and busy."

Richmond has so far shut down about 11% of the terminal space at the airport and he expects that closed off space could eventually total 58%. The closed terminal space will not affect operations but it will help save time and money spent cleaning and maintaining the space, he said.

"It comes as no surprise that YVR's core business has taken a substantial hit," he said, referring to travel bans, national orders to stay home as much as possible and a general reluctance for people to travel.

"The impact can be seen and felt everywhere – closed stores, empty terminal spaces and open parking stalls. We're currently anticipating a 40% to 50% decline in passengers over the year. Right now, we are seeing between about 10,000 and 20,000 passengers per day, down from a standard March break, where we'd be close to 70,000 [passengers.]"

BIV reported in January that YVR attracted an estimated 26 million passengers in 2019, and was in a pitched battle with Seattle-Tacoma International Airport to lure passengers and new airlines.

YVR since March 18 has been one of four Canadian airports that the Canadian government has mandated most international flights be funnelled into.

"We expect international and U.S. traffic to drop to near-zero in the weeks ahead," Richmond said. "We anticipate our domestic traffic will drop to about 30% of its normal volume. Frankly, it is going to get worse before it gets better."

Richmond, who has spent decades in the airport-management business, said that the current crisis' impact on operations surpasses that in the aftermath of the terrorist attacks on September 11, 2001, the 2003 Severe Acute Respiratory Syndrome (SARS) outbreak and the 2008-2009 global economic downturn in terms of longevity, depth and human cost.

"It's the biggest challenge YVR has faced," he said. "Because we are an economic engine for the region, the impacts have been far reaching."

Richmond had planned to retire in June and the airport authority's board had been looking for a replacement. The board, Richmond said, has asked him to stay on if needed, and he accepted.

"I have agreed to stay on temporarily as required," he said. "It is the right thing to do and it's the least I can do."

Richmond on March 17 vowed to "never close" his airport, prompting some on social media to say that such a decision would not be up to him, but rather it would be up to the federal government. BIV put that question to Richmond March 27 and he said, "the federal government would want us to stay open. Even if we had no cargo and no passengers, there are medical flights, there are emergency flights. I can't conceive of a time the airport would be closed. In fact, we weren't closed during 9-11, the airspace was."