Special report: Protecting seniors’ homes from the pandemic's next wave

By Stefan Labbé | July 22, 2020, 1:01pm
Brigitte Buermann waves to her husband Bernie, who suffers from vascular dementia and has spent four months under lockdown at a long-term care home in Port Coquitlam. Brigitte has window-visited every day since the pandemic began, and now that measures are slowly being lifted, she worries her 15 minutes a week won’t save him from forgetting her all together. “If I could gown up, I would – I’d go in there,” she said. Credit: Stefan Labbé/The Tri-City News

It was the first week of March and Dr. Michael Schwandt and his team were in the midst of what would soon feel like an endless cycle.

The outbreak control team was huddled in their Vancouver offices, poring over another case of COVID-19.

But when those lab results came over the phone, everyone knew it was something different: SARS-CoV-2 positive. The novel coronavirus had made it into Lynn Valley Care Centre.

“There was a lot of concern, the knowledge that this could be a very serious situation,” said Schwandt. “It was a feeling of going to work.”

That work would balloon in the coming weeks, as the outbreak claimed the first COVID-19 death in Canada – an 80-year-old resident – and morph into the health authority’s deadliest outbreak, taking 20 lives and infecting a further 59.

The latest tallies find between 81% and 85% of deaths in Canada occurred in seniors’ homes, compared to an Organization for Economic Co-operation and Development

These are often the frailest of Canadians, caught in a system experts say has long been neglected, where unregulated government transfers make up only two-thirds of the OECD average and often fail to ensure adequate care.

Four months into Canada’s pandemic, just what went wrong in those early days and how B.C. turned around what looked to be an impending disaster serve as lessons.

But B.C.’s window of relative calm also begs the more pressing question: are we doing enough to protect our seniors in the face of a second wave?

Not long after Schwandt got the first lab results, it became clear the virus had been circulating in the population at Lynn Valley for days.

“You’re looking at not controlling one or two branches, but multiple branches all at once, which means at that point you’re playing catch-up,” he said.

Fear over the new virus led many staff at Lynn Valley Care Centre to abandon their posts in the early days of the outbreak.

“We were helping to give meals to residents and doing basic care for our own parents because nobody showed up to work that weekend,” said Althea Gibb-Carsley, whose mother-in-law, 94-year-old Isabelle Mikhail, would later die of COVID-19 at Lynn Valley.

“We realized … that the help was not there. And so we made a decision to go every day. We took time off work and we realized we had to be in there.”

There was little communication, said family members, because nobody was even answering the phones at the nursing home. 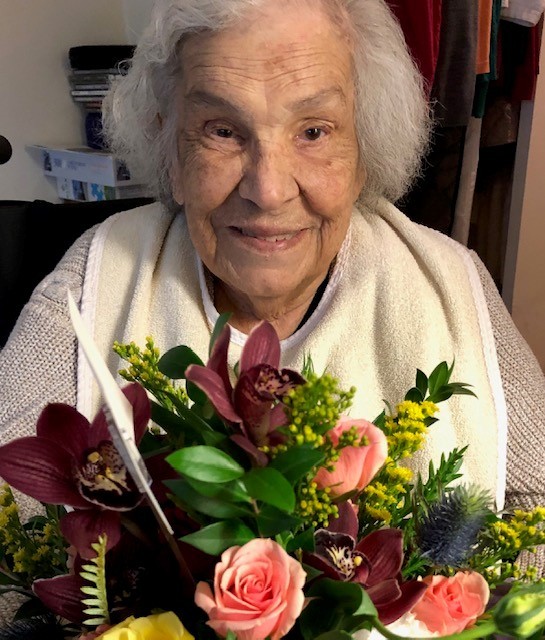 Isabelle Mikhail, 94, was one of 20 residents of North Vancouver’s Lynn Valley Care Centre to die of COVID-19 | Submitted

“B.C. had some of the same sins that all the other provinces had too: they had people who were being paid poorly working in these homes, and working between multiple homes to try and make ends meet,” said Sinha, who in addition to his clinical work, also heads of the National Institute on Ageing think tank and advises the Ontario government.

At the time, some of the most emblematic images of the virus overseas were of the construction of a field hospital in Wuhan and of an Italian health system in free fall as ICUs overflowed with patients unable to find a ventilator.

“We drank the Kool-Aid,” Sinha said. “We said, ‘Let’s shore up our hospitals, let’s do everything we can, let’s buy ventilators.’ Money was flowing like nobody’s business to make sure our hospitals were protected.”

He added, “Was there an overemphasis around acute care? Absolutely. We never figured out our systemic vulnerabilities.”

In the weeks leading up to the first cases at Lynn Valley, health officials in B.C. had been closely watching the rising death toll across the border at a care home in suburban Seattle. So when the U.S. Centers for Disease Control and Prevention came out with a day-by-day study of the outbreak at the Kirkland home, Schwandt and his colleagues took note.

They were some of the first in North America to apply a playbook known outside of B.C. as the “Iron Ring” protocol, a set of outbreak measures first implemented in B.C. and designed to suffocate COVID-19 in a nursing home.

Provincial health officer Dr. Bonnie Henry issued a B.C.-wide single-site work order, followed by bumps in pay for over 7,000 care aides to go along with strong infection control measures and universal masking for all frontline workers.

The more the virus spread, the more infection control experts realized COVID-19 was like nothing they had seen before. Unlike SARS, it soon become clear that COVID-19 was an asymptomatic predator, and a simple change of a bandage could spark a cluster.

Inside B.C.’s seniors’ homes, health teams were testing residents and staff who seemed fine, and outbreaks went from dozens of deaths down to single digits or none at all.

It’s what B.C. Seniors Advocate Isobel MacKenzie called “a lucky break” for British Columbians, whereas an unfortunately timed spring break led to a wave of infected spring breakers returning to Ontario and Quebec, driving caseloads which eventually filtered into homes.

Or as Sinha put the jurisdictional divide, “Days matter with COVID [and] B.C. was able to take control and apply the evidence.”

In Ontario, however, care facilities were left to fend for themselves, he said.

It’s a strategy many say was aided by the province’s health authority system, offering a command and control structure that allowed it to quickly centralize the distribution of gowns and masks in the early stages of the pandemic.

Health authorities continue to roll out widespread testing of asymptomatic patients, and in Fraser Health – the hardest hit health authority in the province – officials told Glacier Media that they’re recruiting and training a pool of new contact tracers to be ready for a resurgence of the virus in the fall.

One of the biggest concerns, according to Schwandt, is the potential for a second wave of COVID-19 to overlap with an influenza season.

“Right now if someone has a cough and a fever in B.C., we would say COVID-19 is very high on your list of concerns as a clinician. With flu in the mix or other seasonal respiratory infections like the common cold, it will become much more challenging,” he said, adding that his team is currently analyzing any gaps in testing capacity.

Despite all the precautions, the strict emergency protocols that have protected many B.C. homes from the first wave of the virus have created unforeseen consequences, and some say those oversights are starting to catch up with staff and residents.

It wasn’t until the end of June that B.C.’s nursing homes fully implemented the protocol, something MacKenzie says speaks to the fragmentation of the system.

Every health official and researcher interviewed for this story agreed federal and provincial governments need to work towards national standards for care aide training, pay and oversight of the $1.3 billion in government transfers made in B.C. every year to ensure quality care.

“It doesn’t take a rocket scientist,” said MacKenzie. “We need to move towards offering full-time jobs at a decent salary. It requires training, not extensive training but some training. It absolutely requires a sense of responsibility.”

But many doubt whether such an institutional shift can get off the ground in time for a second wave. Care aides make up roughly 70% of staff at long-term care homes, but there are others behind the scenes who say they’ve fallen through the cracks.

“What sticks out the most to me was how support services – so laundry, housekeeping and dietary – are overlooked, and yet we are the grassroots of the facility. We hold this thing together,” said one worker who manages dozens of kitchen and laundry staff serving over 500 residents in Fraser and Vancouver Coastal Health.

The woman, who asked to have her name withheld because she feared repercussions at work, said she has been left shorthanded while health officials bolster the ranks of their care aid colleagues.

“Fraser Health did not consider support services as essential as care, so we suffered quite a bit. When we got hit with COVID, I was a housekeeper, I helped out in laundry, I did dietary aid and I cooked – all in one day,” she said. “I was working 70 hours a week in order to make ends meet.”

Part of the problem is a shadow workforce – made up of essential family visitors – that has been kept out of long-term care since the first lockdown at the Lynn Valley, said Sinha.

“The key is nobody has been taking stock of how much unpaid care was actually being provided in these settings,” he said.

The estimates are massive: 93% of Canadians receiving government-funded home care have a family caregiver involved, according to data from the National Institute on Ageing.

“All that stopped overnight,” said Sinha.

Now, as the province opens up care homes to family, Sinha is urging health officials to build a reserve family workforce for seniors’ homes, one that is trained in the use of masks and gowns and can support staff should the province be hit by a second wave of the pathogen.

“The nuance is during an outbreak if there are family members who want to be partners in care and remain, how do you figure out what works,” he said. “This is not a way to cheap out on the nursing or the care that we provide. This is a ‘both ends’ approach.”

For Dr. Schwandt, balancing the benefit of a family member’s presence with the risk of introducing the virus is something health officials will need to tread for many months or even years ahead.

“We do need to find a way to walk that line.”

Glacier Media’s in-depth look at the problems besetting care for the elderly in B.C. as the COVID-19 pandemic exposes deep weaknesses in the system. See also:

• How did a long-term care crisis emerge? Pressure on funding and a move to for-profit care were prime reasons, experts agree.
https://biv.com/article/2020/07/special-report-systemic-failures-bc-seniors-care-left-facilities-unprepared

• How do we fix the problems in our long-term care facilities? Studies point to some solutions.
https://biv.com/article/2020/07/special-report-financialization-seniors-care-has-failed-bc-families-critics-say