By Glen Korstrom | October 26, 2021, 8:08am
Vancouver’s Dominion Building at 207 West Hastings Street was for a brief period the tallest building in the British Empire | Chung Chow

Allied Properties REIT's decision to buy Vancouver’s Dominion Building highlights the enduring attraction of heritage structures, as some tenants seek well-maintained, older and distinctive buildings because they value the prestige they believe the locations carry.

The Toronto-based company (TSX:AP-UN) is set to pay previous owner Army & Navy Properties what CEO Michael Emory told BIV was the “appraised value” for the 1910-built structure at 207 West Hastings Street, which was briefly the tallest building in the British Empire.

That purchase, set to close in mid-November, is for a value that is “certainly higher” than the site’s $40.3 million assessed value, he added.

About 80% of Allied’s 204 buildings across Canada are older buildings, or heritage structures, making the company one of the country’s largest owners of such buildings.

Allied owns 13 buildings in Vancouver, including the 109-year-old Sun Tower at 128 West Pender Street, which it bought in 2011 and spent nearly $9 million to upgrade.

“The value of real estate derives almost entirely from the revenue stream, from the operating income,” Emory said. “The way we look at it is that we’ll make an investment if we can drive an acceptable level of operating income from the existing asset, and if we can boost that income over time by upgrading the asset.”

He estimated that the Dominion Building generates about $2 million in annual cash flow, and said that he expects to “increase that systematically, and methodically, over time.”

The jump in cash flow would come from higher lease rates. 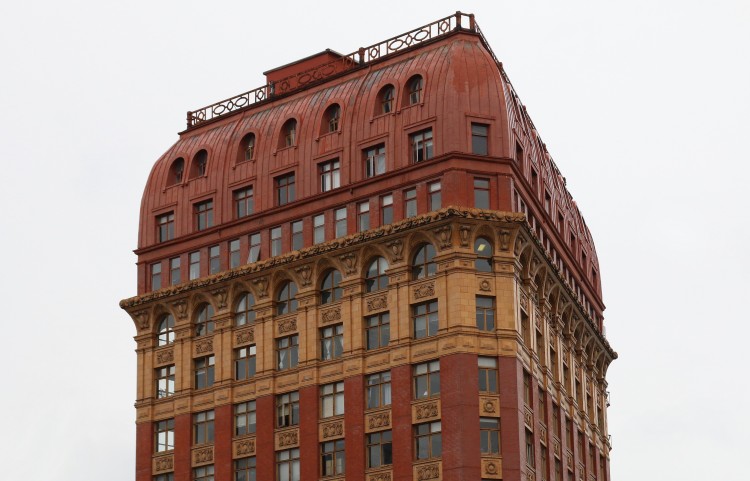 Gary Fraser, a partner at Burrard Law, located in the 91-year-old Marine Building, told BIV that he was not sure how much his firm’s lease costs would be different were it in a new Class AAA structure.

“Our staff enjoy the fact that we’re in this heritage building,” he said.

Fraser added that being in that Vancouver landmark has cachet, and that he rarely needs to give people a street address because the building’s location is so well known. 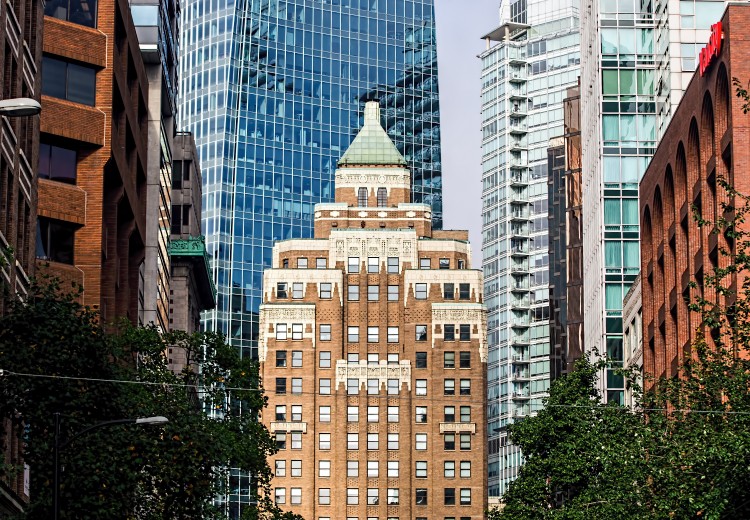 (Image: The Marine Building is known for its art deco architecture | Chung Chow)

Emory expects that initial upgrades at the Dominion Building will include modest improvements to indoor common space – so current tenants need not worry about near-term rent hikes.

Within the next decade, however, he said Allied might “take a more comprehensive approach to restoring and reconfiguring the building.”

That upgrade would include evicting tenants and restoring exterior cladding, and cornices.

Some tenants were evicted at the Sun Tower, when Allied did what essentially amounted to a seismic upgrade, with work on its steel frame and exterior stone cladding.

Allied also replaced the building’s dome with a copper roof. The dome was previously coated with terracotta tiles painted green so as to resemble copper.

City of Vancouver incentives helped make the work viable, but amounted to only about $2 million, or less than 25% of the restoration costs, Emory said. 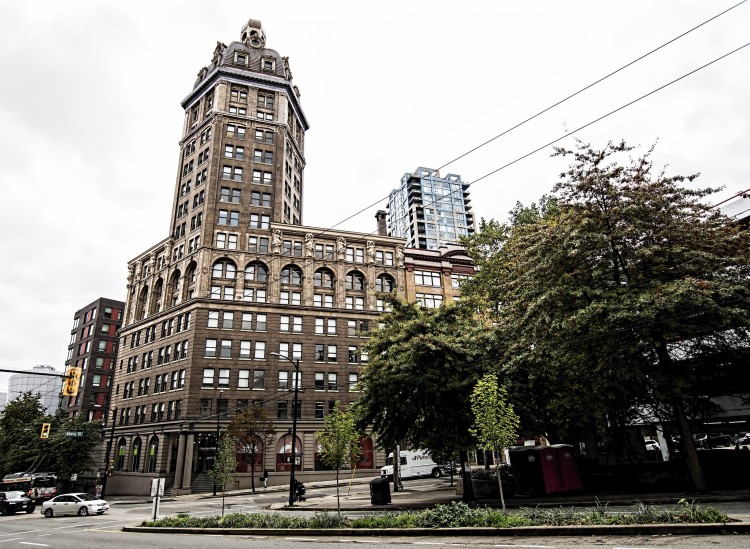 (Image: The Sun Tower is located at the corner of West Pender and Beatty streets | Chung Chow)

Allied tends not to buy buildings, or embark on upgrades, solely because of city incentives because, Emory said, “they’re insignificant, and secondly, they’re unreliable, because municipal governments change all the time.”

But in 2009 the City of Vancouver stopped awarding new density to developers that embarked on these projects; it also made it challenging for developers who had been rewarded with bonus density for previous work to sell that density.

Fung told BIV that it took him about 15 years to sell density that he acquired in the early 2000s.

“It was an ongoing battle,” Fung said. “The city just manipulated that program and made it very unfair and challenging. It is water under the bridge now. It’s difficult, though, to envision what would happen if they were to roll out another program that systematically required the city to do something in good faith. I think the industry would really question whether it makes any sense to trust it.”

Indeed, it is the lack of what Fung views as clear and reliable city incentives for upgrading heritage structures that has prompted him to turn his attention toward projects in Victoria.

“The City of Victoria has a program, and it’s clear,” he said. “Vancouver hasn’t had clarity on many things around development and real estate for over a decade.”

The City of Vancouver told BIV in an email that it ended its bonus density program because the initiative generated “an unsustainable amount of transferable bonus density.”

The city does, however, allow developers to transfer residual, or unused density, within certain areas.

Stovell said Reliance’s heritage upgrades at 53 Water Street, where the Old Spaghetti Factory is a ground-floor tenant, and at 568 Beatty Street, where Chambar restaurant operates, came with discounts on property taxes for 10 years, bonus density and grants for saving building facades.

The city said it stopped offering property tax exemptions for heritage-building upgrades in 2015, but still has facade grants of up to $50,000.