Airline in 2009 halted Vancouver flights that had a Seoul stopover

Singapore Airlines plans to relaunch flights to Vancouver, after a 12-year absence, only this time the flights will be non-stop to the airline's home base.

The airline had flown thrice weekly between Singapore and Vancouver, using Seoul, Korea, as a stop-over. In 2007, it asked the Canadian government for permission to fly that route daily, but because of the two countries' air agreement, domestic airlines had to agree to give Singapore Airlines that permission.

Air Canada rejected the request because Singapore Airlines' extra flights on the Vancouver-Seoul leg of the journey would have cut into Air Canada's business, Air Canada confirmed to BIV in 2013.

University of British Columbia adjunct professor John Korenic, whose expertise is aviation management has told BIV that airlines often aim to fly daily, as opposed to three times per week, to destinations because it is a more efficient use of aircraft.

Singapore Airlines was permitted to fly daily flights non-stop between Singapore and Vancouver, but the airline did not deem that a viable route in 2009, when the world was also recovering from the global economic crisis.

Advances in aviation technology, however, have made longer-haul flights more fuel efficient.

Singapore Airlines said in a news release that it plans to fly to Vancouver using a 253-seater Airbus A350-900, with 42 business-class seats, 24 premium-economy seats, and 187 economy seats.

Singapore Airlines' planned Singapore-Vancouver flights would also be part of a new route, whereby Vancouver would be the stopover between Singapore and Seattle.

The airline's plan is to test this new route between December 2 and February 15, 2022, with flights four times per week: Tuesdays, Thursdays, Fridays and Saturdays.

Return flights would leave Seattle at 11 a.m., arriving in Vancouver 45 minutes later. The planes would then leave Vancouver at 1:15 p.m., and arrive in Singapore the following day at 10:05 p.m.

Tickets are set to be available for sale starting at 9 p.m. on October 11, Vancouver time.

One catch is that two of the four new weekly flights from Vancouver to Singapore would be part of Singapore's Vaccinated Travel Lane (VTL) program.

Singapore Airlines' website says that travellers on those VTL flights "will be required to show proof of Covid-19 vaccination, and take two Covid-19 Polymerase Chain Reaction (PCR) tests when flying into Singapore."

Those tests would include one before boarding the plane, and one after arriving.

None of the four flights flying from Singapore to Vancouver would be exclusively for vaccinated travellers, as the VTL program is only for arrival in Singapore.

Canada and Singapore are both signatories to the Comprehensive and Progressive Trans-Pacific Partnership (CPTPP).

Canada West Foundation research holds that western Canadian sectors that stand to benefit from Southeast Asian opportunities under the CPTPP include agriculture, processed foods, and machinery and equipment.

Singapore's Changi Airport regularly ranks as the world's best airport in Skytrax World Airport Awards, which are based on millions of customer satisfaction surveys.

The airport has plenty of free services, such as free foot massage machines, free movie theatres, and a free butterfly garden. 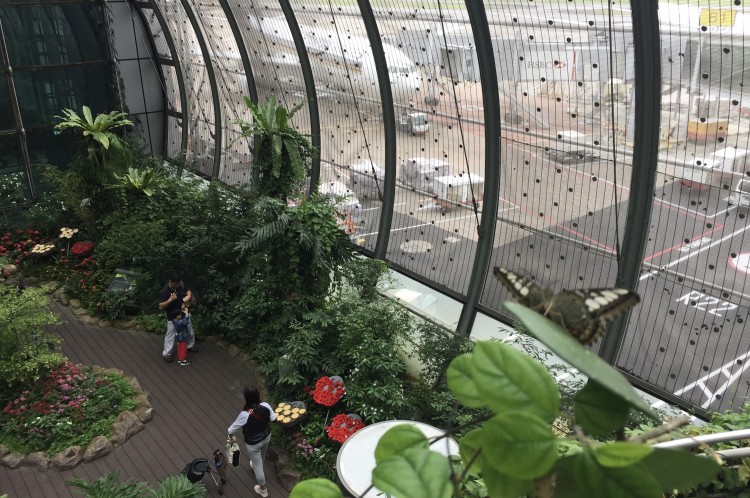 (Image: A plane is visible on the Changi Airport tarmac through windows of the airport's free butterfly garden, where a butterfly sits on a leaf in the foreground | Glen Korstrom)