Competition heats up for eyewear in B.C.

Sparring between executives has intensified as more players enter the market

By Glen Korstrom | August 10, 2022, 8:08am
Arnaud Bussieres is CEO of EssilorLuxottica’s Clearly division, which employs more than 200 people in Metro Vancouver |Chung Chow

KITS Eyecare Ltd. CEO (TSX:KITS) Roger Hardy likes to go for the jugular when he believes competition is trying to unfairly encroach on one of his company’s selling points.

The founder and former CEO at what is now Clearly has long been aggrieved that Clearly says on its website that it is “proudly Canadian.”

In February 2014, Hardy announced a deal to sell what was then the Nasdaq-listed, Vancouver-based Coastal Contacts to French lens giant Essilor for $430 million. Coastal Contacts owned Clearly.

Essilor then merged with Italian eyewear frame titan Luxottica in a 46 billion euro pact to form EssilorLuxottica, which trades on the Euronext Paris market (EL:FP), generates about 21.5 billion euros in annual sales and is estimated to own more than 40 per cent of the world’s eyewear market.

He included a GIF of a person wearing a hoodie and sunglasses amid a crowd of people. Its caption: “She doesn’t even go here!”

The tweet attracted more than 90 retweets or quoted tweets, and more than 1,300 likes. 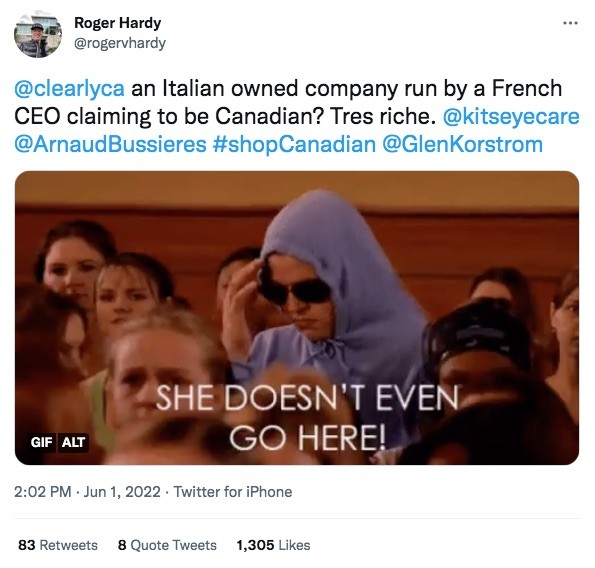 Hardy’s jab was meant to highlight that EssilorLuxottica is based in Europe, and that its Clearly division’s CEO, Arnaud Bussieres, is originally from France.

Hardy told BIV that part of what drove him to send the tweet was a Clearly marketing email that suggested that customers could buy eyewear for less than it costs to buy poutine or a box of 50 Timbits.

Bussieres said in the letter that the pitch was from “one Canadian to another.” Its reference to products from the iconic Canadian doughnut seller Tim Hortons was a subtle way of suggesting that its products were as Canadian as those from Tim Hortons – a venture now part of Toronto-based Restaurant Brands International (NYSE:QSR).

BIV asked Bussieres, who has lived in Vancouver and been Clearly CEO since the start of 2018, if he had become a Canadian citizen, but he declined to answer.

There are many examples of companies that BIV considers to be based in Metro Vancouver despite being wholly owned by foreign companies.

Bussieres told BIV in an email that “Clearly is a diverse company with a management team represented by seven different countries, including Canada.”

EssilorLuxottica has executives based in North America outside Vancouver whose jobs are to oversee e-commerce operations.

New York-based Edoardo Carraro is the company’s head of e-commerce in North America, according to his LinkedIn profile.

BIV asked Bussieres in an email if Carraro or Anderson were involved in Clearly’s operations, but he did not respond.

Bussieres agreed to an interview three times, before cancelling each time. He then sent BIV a single paragraph email that answered few of BIV’s questions.

How Clearly has evolved since its 2014 sale to EssilorLuxottica

EssilorLuxottica does not break out Clearly’s revenue, and Bussieres no longer provides figures.

He estimated at the time that Clearly would generate $10 million in profit in the 2019 calendar year.

Those sales are down significantly from the $217.5 million in Coastal Contacts’ last full fiscal year as a public company: 2013, a year in which it lost more than $15.9 million.

One thing that made Clearly different in 2019 from Coastal Contacts in 2013 was that it had a smaller global footprint.

Coastal Contacts generated $84.6 million of its 2013 sales in Europe from its Lensway brand.

EssilorLuxottica kept Lensway, but by 2019, those sales were hived out of Clearly’s operations and were operated separately.

In 2019, Bussieres’ division of EssilorLuxottica included sales in Canada, Australia, New Zealand and the U.S.

BIV asked him if that geographic footprint had changed, but he declined to answer.

He said in 2019 that he sees value in capitalizing on synergies from being part of the world’s largest eyewear conglomerate.

That meant having some manufacturing done offshore, such as in India.

He told BIV in a June 26 email that Clearly manufactures and distributes eyewear in Richmond, but he declined to say whether production is also done in Asia.

Before Essilor bought Coastal Contacts, the company’s manufacturing was done at the Broadway Tech Park in East Vancouver.

Hardy has since acquired a lease on that 120-employee facility, and he uses that manufacturing plant to produce around 1,000 pairs of glasses each day for KITS, he said.

That enables KITS to deliver standard prescription eyewear in Metro Vancouver within a few days of orders being placed.

Orders from Clearly earlier this year took several weeks to reach Vancouver addresses despite the company having at least some manufacturing done near Vancouver International Airport.

KITS Eyewear and other competitors vie for consumer dollars

When Hardy sold Coastal Contacts to Essilor in the $430 million transaction in 2014, he and members of his family owned about 20 per cent of the company, worth around $86 million.

He told BIV that the contract he signed with Essilor included a three-year non-compete clause.

“They paid me during that time to not compete,” Hardy said.

He dabbled in projects, such as building an e-commerce shoe business, Shoes.com, which wound up going bankrupt.

Hardy pins his real estate portfolio’s value at more than $100 million, while his other ventures have included stakes in the since-sold Liquidity Wines, Sonder Holdings Inc. (Nasdaq:SOND), Mogo Inc. (Nasdaq:MOGO) and Flexday. 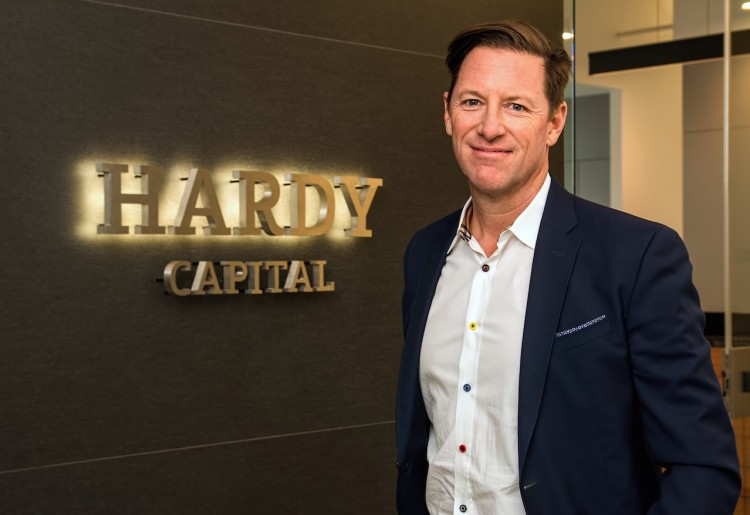 After the non-compete period with EssilorLuxottica ended, Hardy invested and sat on the board of directors at Privé Revaux – an eyewear brand that sold a majority stake to Italy’s Safilo Group for $110 million in early 2020.

Hardy’s focus has largely been on KITS since he launched the venture in 2018 along with co-founders Sabrina Liak and Joseph Thompson.

“I was feeling for people – that [Clearly] wasn’t a great experience anymore, that Clearly wasn’t still the leader in the category, that delivery times got slower and that the quality had gone down,” Hardy said of his reasons for co-founding KITS.

He, Liak and Thompson frequently bought coffee at the former Starbucks (Nasdaq:SBUX), at the corner of Cornwall Avenue and Yew Street, and the three would walk to nearby Kitsilano beach, where they discussed ideas for a venture that the trio could run.

After considering businesses in the cannabis or the cryptocurrency sectors, the three decided to pursue an eyewear e-commerce initiative.

Hardy sought to own the Kits.com domain – fully expecting Vancouver billionaire and Kitsilano resident Chip Wilson to already own that property.

Instead, an American owned the web domain, and Hardy was able to entice him to sell the domain in exchange for $500,000, Hardy said.

“Entrepreneurs, when they get something in their heads, they’re kind of stupid,” Hardy said of his decision to pay lavishly for the domain name. “Not a lot of people would have done that.”

Starbucks decided not to renew the lease for its Cornwall Avenue coffee shop, and Hardy leapt at the chance to grab that location.

The KITS-branded café sells coffee and pastries, but it is distinctive in having eyewear display cases that showcase KITS frames, and a computer for customers to use to enter their prescriptions and complete online purchases. 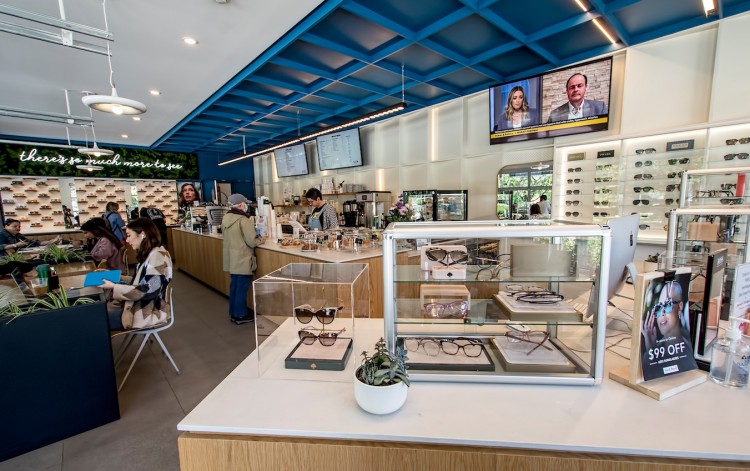 (Photo: The inside of the KITS store on Cornwall Avenue sells both eyewear and coffee | Chung Chow)

This was similar to how Hardy used third-party manufacturers when he started building Coastal Contacts in 2000, he added.

It processed 148,000 eyewear orders in the three months that ended March 31, generating more than $20 million in revenue, while losing more than $2.2 million.

While EssilorLuxottica dominates the global eyewear business, smaller competitors are nipping at its heels.

The company said in May that it expects to sell between US$650 million and US$660 million worth of merchandise in 2022 through more than 170 stores and its e-commerce channel. That is up from US$540.8 million in 2021, and it makes Warby Parker nearly eight times larger than KITS. Warby Parker aims to operate more than 200 stores by the end of the year.

Two of Clearly’s seven Canadian stores are in B.C., both of which are in Vancouver.

Hardy dismissed Bailey Nelson and Ollie Quinn as “tiny, little immaterial things as far as we’re concerned,” even though they have ambitious growth plans and significantly larger bricks-and-mortar operations than KITS’ single store. 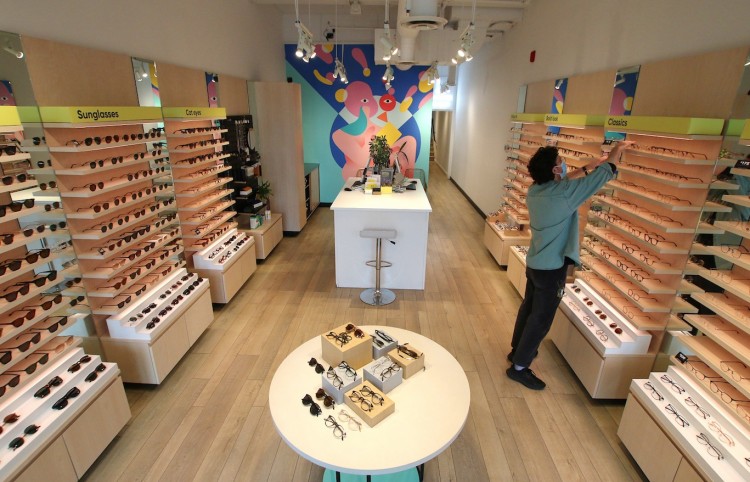 The two companies have a common link.

Ollie Quinn’s Vancouver-based CEO Michael Andersen launched the Bailey Nelson brand in Canada, in Gastown in 2014, and expanded his retail presence to three franchised stores by 2017.

Quibbles with Bailey Nelson management led Andersen to cut ties with the Australian venture, co-found Ollie Quinn and rebrand his stores under that new name.

Andersen told BIV that inspiration for the company’s name was based on how the initials OQ could resemble eyes in marketing materials.

He then expanded Ollie Quinn to Toronto, Ottawa, Calgary, Seattle and London, England.

“We’re about to add a 17th store, at Brentwood Town Centre on September 1,” Andersen said. 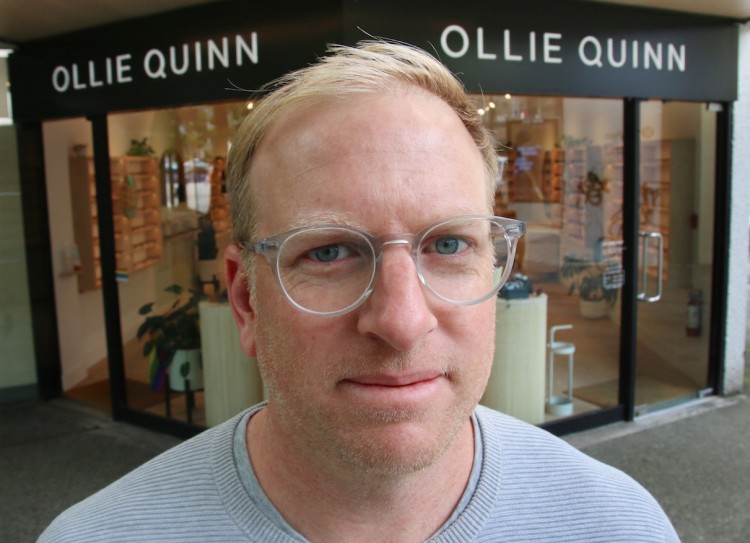 “Compared to some of these players, we are very small or niche. We would be talking $30 million in annual revenue.”

It has since rapidly expanded its global geographic footprint and recently passed the 100-store mark, said Vancouver-based John Currie, who sits on Bailey Nelson’s board of directors.

“Globally, we will probably open 20 stores this year, with half of those being in Canada,” he said. “We don’t have the final list at this point, but there’s lots more growth potential in B.C.”

Both Andersen and Currie said that their ventures generate more than 90 per cent of revenue from bricks-and-mortar locations.

Specsavers’ entry into the market set to be a game changer

The largest new entrant into the B.C. and Canadian eyewear sector is U.K.-based Specsavers.

In 2021, it bought for an undisclosed amount Alan Boyco’s Image Optometry business that included 10 corporately owned and eight franchised stores.

Specsavers rebranded the first of those stores in November and is in the final phase of renaming those retail spaces as Specsavers.

It plans to operate all stores as franchised businesses, Specsavers’ Vancouver-based general manager for Canada, Bill Moir, explained to BIV. 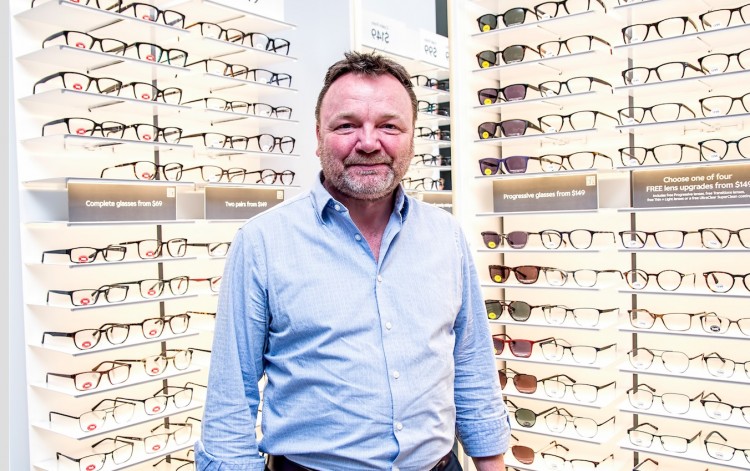 Specsavers’ strategy has been to assume leases for all locations, spend about $500,000 to renovate each store and then sublease the spaces to the franchisees.

Franchisees pay a “small” upfront fee, and then a range of different royalties, depending on which Specsavers services they use, Moir said.

The company plans to find new franchisees after all of the Image Optometry stores are rebranded and to have a total of 50 eyewear stores in B.C. by 2024.

That would cost $25 million in renovations, he added.

Boyco told BIV that he sold Image Optometry to Specsavers in part because he wanted time to spend on his auto-repair businesses.

He also thinks that bricks-and-mortar optical stores are “doomed.”

That is because online tools for determining vision prescriptions and pupillary distances are on the verge of becoming so good that many consumers will not pay optometrists for those services.

Independent eyewear store owners such as Abasa Optical co-owner Asra Kamrudin told BIV that bricks-and-mortar stores operate at a disadvantage because B.C. law requires them to see customers' prescriptions. Online retailers are able to allow customers to enter prescription data that may be outdated.

Eye doctors will still be needed to assess patients for macular degeneration, glaucoma and other diseases, but simple vision tests will be a decreasing part of their workload, Boyco said.

A final reason that he sold his retail eyewear business was that he said Specsavers is “predatory.”

Boyco said that if he did not sell his business, Specsavers would enter Canada in another way, and squeeze his profit margins.

“I know how aggressive they are,” said Boyco, who has been the Vancouver Canucks’ official eye doctor since the 1990s.

“I know that when Specsavers went into Australia, for example, within a year they owned 85 per cent of every optometry office.  I knew that what would take me 20 years to do, they can get done in two years.”

Boyco continues to own the contact lens brand HD20LENS. He has also kept his e-commerce eyewear site 38dollarglasses.com, which he believes will be able to capitalize as more people shift to buying eyewear online. •