By Nelson Bennett | September 13, 2022, 9:28am
Joe Aquino, director of sustainability for Drax, explaining the composition of waste wood set to be turned into wood pellets at the U.K. company’s Lavington mill in B.C. | Photo: Nelson Bennett

British Columbians of a certain age may remember beehive burners. Most towns in B.C. with a sawmill had one. In the late 1990s, the B.C. government began phasing them out, and in their wake a wood pellet industry began to grow to deal with sawmill waste.

It seemed like a win-win situation for the environment and forest industry – one that reduced air pollution, addressed the sawmill waste problem and provided a renewable, carbon-neutral energy source that was starting to displace coal.

As countries like Japan and the U.K. began displacing coal in thermal power plants with biomass, a market for wood pellets began to grow. About 60 per cent of Europe’s renewable energy is bioenergy, mostly wood biomass.

But as the demand for wood pellets has grown over the last two decades, so too have concerns about the wood pellet industry and its impact on forests.

B.C. now has about a dozen wood pellet plants and exports 2.3 million tonnes of pellets annually. Canadian wood pellet exports were valued at $347 million in 2020.

Environmental groups like Stand.earth and the Natural Resources Defense Council in the U.S. have been stepping up campaigns against the industry, questioning the climate calculus that deems biomass to be carbon neutral.

Forests are important carbon sinks, after all. If living trees are cut down to produce energy, the carbon neutrality of biomass may be called into question. That’s especially true if more trees are harvested than regrown.

Currently, most of the inputs used in B.C. pellet mills come from sawmills and harvest residuals such as slash, which is typically burned anyway.

“Right now, if you’re burning it anyway, you might as well turn it into pellets,” said sustainable energy expert Chris Bataille, an adjunct professor at Simon Fraser University. “But if you’re materially impacting the harvest, and you’re displacing wood or increasing the harvest, then definitely you are going to have carbon debt and net neutrality issues.”

Drax Group (LON:DRX), the British power company that now owns seven pellet mills in B.C., has come under increased scrutiny from environmentalists over its alleged use of live whole trees to supply its growing pellet business.

BIV recently toured one of Drax’s operations in the Okanagan to take a look at what goes into wood pellets made in B.C. For this story, BIV also requested an interview with B.C.’s chief forester to respond to some of the concerns raised by environmental groups. The Ministry of Forests said he was on leave and no one else was available for an interview. 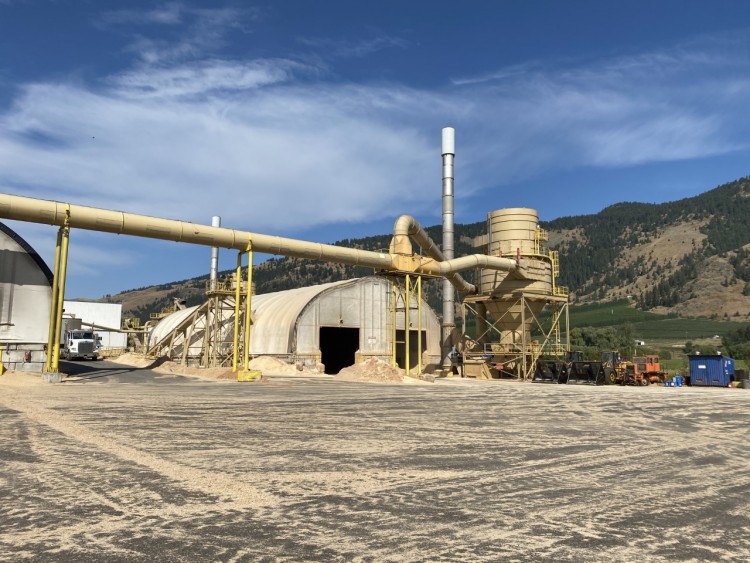 A few kilometres up the road from Drax’s Lavington wood pellet mill east of Vernon is a large storage yard with mountains of logs and tangled forest waste. These trees will eventually be ground up and turned into wood pellets and exported to Asia and Europe, with most of it burned to generate electricity.

From a distance, some of the logs on site may look like marketable timber. On closer inspection, however, it is clear that the trees in the log piles are trash: Tree tops, small fire-damaged trees and larger logs that are cracked or rotten with heart rot.

In their campaign against the wood biomass industry, environmental groups have taken photos of large log piles like these as proof that whole live trees are being harvested in B.C. to feed the wood pellet industry.

“Scooping up the last remaining intact, old growth and primary forests in the world to burn for energy in the frantic race to get off of coal, forest biomass is dirtier than coal at the smokestack,” Stand.earth said in a preface to a 2020 investigation it produced.

If it were true that companies like Drax are cutting down primary forests to make wood pellets to burn in place of coal, that would indeed be a concern – a concern that the European Parliament is proposing to address by declaring primary wood biomass to be “unsustainable.”

But Drax insists that it is not harvesting trees in Canada to make wood pellets and that doing so would make no economic sense. Trees are valuable, after all, and wood pellets are at the bottom of the forestry value chain.

“We’re about 15 times less than what the sawmill industry can pay,” said Joe Aquino, a registered professional forester and director of sustainability for Drax’s Canadian operations.

On average, about 80 per cent of the inputs in Drax’s seven wood pellet mills in B.C. is sawmill waste, Aquino said. About 20 per cent is harvest residuals – branches, treetops and low-value logs that sawmills don’t want.

Drax owns six pellet plants in the U.S. There, the mix is 70-30: 70 per cent sawmill waste, 30 per cent harvest residuals, “thinnings” and low-value logs. 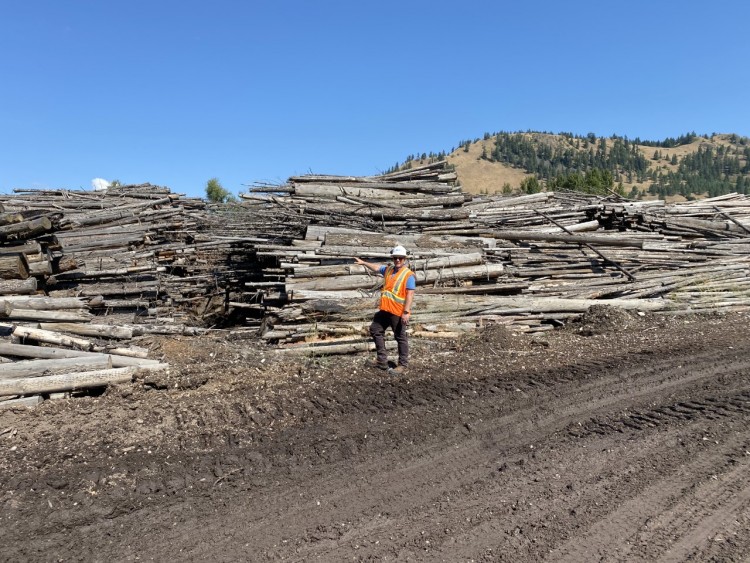 A log storage yard near the Lavington pellet plant.

When a logging company harvests a cutblock, anywhere from 10 per cent to 15 per cent of the trees harvested may be deemed uneconomic (not sawlog grade). It was even higher than that when forests damaged by the Mountain pine beetle were being harvested. About half of that low-grade timber would be deemed pulp logs used to make pulp and paper. The rest is typically burned in slash piles, if no buyer can be found.

When a logging company harvests a cutblock, the trees get sorted and then graded by independent third-party scalers.

When deciding whether a tree can be turned into lumber (i.e. sawlog quality), the amount of “firmwood” in it is considered. A Grade 1 log would be 75 per cent firmwood. A Grade 4 log has less than 50 per cent firmwood. It may have cracks, heart rot, twists, fire or pest damage that makes it worthless to a sawmill or even a pulp mill. That’s the sort of stuff that ends up in a woodpile destined for a pellet mill. In the absence of a buyer, these logs end up in a slash pile, along with branches, treetops and other debris, and set on fire.

One company in B.C., Peak Renewables, recently acquired forest tenure from Canfor Corp. (TSX:CFP) and plans to use lowgrade timber to make wood pellets in a new plant being built in Fort Nelson. The region has a lot of aspen, which sawmills typically don’t use for making lumber.

Drax has no forest tenure licences in B.C. If the company’s name appears on a timber harvesting document, it’s because it has a contract to acquire harvest residuals, Aquino said.

Drax buys harvest waste from forestry companies, as well as private landowners that have logged their properties – ranchers, for example. 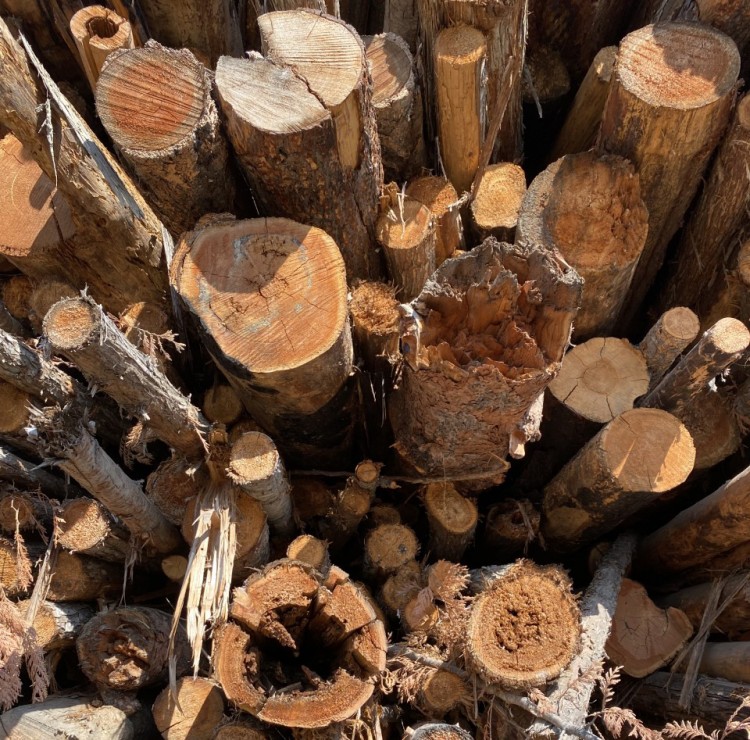 Cracks and heart rot means even larger logs are not suitable for making lumber.

One way or another, slash goes up in smoke

An independent scaler at the log storage site that Drax shares with Tolko said he sometimes finds what might be classed as sawlogs in the Drax log piles: A sawlog generally being one that is 10 centimetres in diameter or more.

If he starts to see too many sawlogs showing up, he informs the buyer, and if he keeps seeing them, he notifies the Ministry of Forests.

After Crown forests are cut, they must undergo a waste assessment. Any timber deemed to be sawlog grade gets billed to the licensee. Because loggers pay stumpage on sawlogs, it would make little economic sense to intentionally sell them for next to nothing to a pellet plant.

Occupying the same log storage site, but separated from Drax’s wood, are sawmill-quality logs. These belong to Tolko.

Parts of these sawlogs will end up as wood pellets, but not before they are first turned into lumber. The shavings, bark and sawdust left over from the sawmilling process are collected and piped directly to the adjacent Drax pellet mill.

The Tolko sawmill provides about 25 per cent of the Lavington wood pellet mill’s inputs. Sawmill waste from other sawmills in the region is trucked to the site.

“It’s being burned anyway, and we might as well capture it, make something that’s going to get burned and energy is going to be generated from it.”

But B.C. has a shrinking annual allowable cut, which has forced some sawmills and pulp mills to shut down. The concern here is that wood pellet producers in B.C. could start running out of sawmill waste and resort to harvesting low-value trees.

But Aquino said there is plenty of timber harvest waste in B.C. that isn’t being used. Of the eight to 10 million cubic metres of waste left over from logging each year, Drax currently uses only about 300,000 cubic metres.

“I still think there’s a ton of opportunity in terms of underutilized slash,” Aquino said.

He added that there is also potential to acquire wood waste from wildfire mitigation projects.

“I think where the opportunity exists in terms of what’s going to be more of a future based feedstock is that wildfire mitigation piece,” Aquino said.

Since 2016, the Forest Enhancement Society of BC (FESBC) has been financing forest enhancement projects, including wildfire mitigation, and replanting trees in forests damaged by fire and pests.

The wood pellet sector has become an important partner in these projects because it takes wood waste from thinning, pruning and spacing of trees.

To date, those projects have recovered 4.8 million cubic metres of forest fibre, some of which went to pellet plants.

“The vast majority of what we’ve helped to be utilized would otherwise have been burned,” said FESBC executive director Steve Kozuki.

“The logging companies [are] required by law to abate the fire hazard,” Kozuki said. “So if there are piles of wood waste and it’s not economic for them to use, they have to get rid of it somehow, and the most cost effective way is to burn it.

“The logs that are being ground up into pellets, you cannot make lumber out of it. I don’t know of any business that would knowingly or willfully decide not to make a profit on a log.” 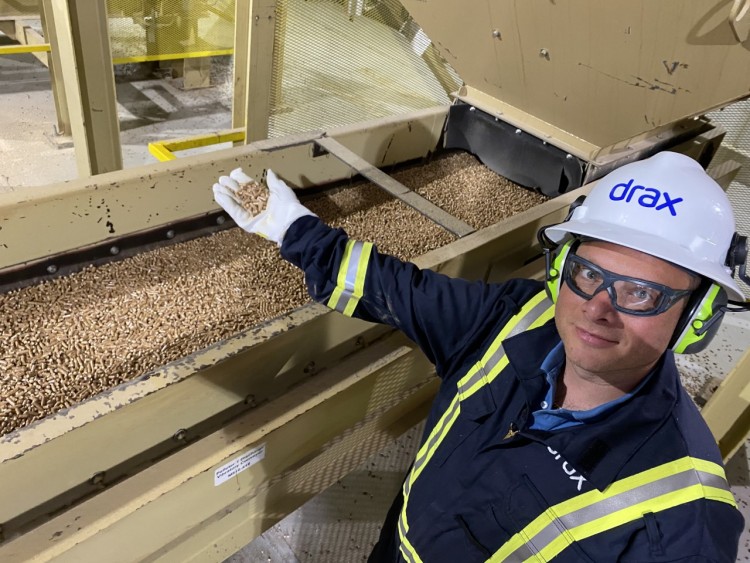 Sawmill and wood waste is turned into pellets.

At its power plant in the U.K., Drax consumes 8.4 million tonnes of biomass annually, with some coming from agricultural waste, but most coming from forestry waste. Of six power-generating units that used to burn coal, four have been converted to burn biomass.

The U.S. is Drax’s biggest supplier of wood pellets, at five million tonnes; Canada supplies 1.8 million tonnes, and the balance comes from Europe.

Drax produces 2.8 million tonnes of pellets from its own Canadian and American plants. In its environment, sustainability and governance data supplement, Drax details where the fibre comes from.

In Canada, sawmill waste accounts for 1.5 million tonnes of fibre input, low-grade roundwood accounts for 181,579 tonnes, thinnings account for 18,131 tonnes and branches and tops account for 153,986 tonnes. Drax’s fibre sources are verified by Bureau Veritas in the U.K. and Control Union in Canada. ■