As of 2020, 22 per cent of Europe’s energy came from renewables. But 60 per cent of that is bioenergy – much of it wood biomass used to produce electricity in thermal power plants or heat homes in pellet-burning stoves.

It’s an industry that has come under intense scrutiny and criticism of late from environmentalists, who say the climate benefits of bioenergy stops when pellets are made from living trees harvested to produce bioenergy.

Burning wood can produce even more carbon dioxide (CO2) emissions than coal per unit of energy because wood is less energy dense than coal.

But because plants and trees regrow, eventually absorbing the CO2 produced through combustion, biomass is classified in international climate change policies and regulations as renewable and carbon neutral.

And when bioenergy is paired with carbon capture and storage (BECCS), it can be carbon negative – removing more CO2 from the atmosphere than it produces.

“BECCS is one of the few technologies that is capable of removing past CO2 emissions remaining in the atmosphere,” states the Intergovernmental Panel on Climate Change (IPCC) Working Group 3 in its latest, and sixth, assessment.

Despite what IPCC scientists say about bioenergy’s role in shifting the world’s energy generation away from fossil fuels like coal and natural gas, environmentalists say bioenergy’s climate benefits no longer add up.

As one of the biggest players in the wood pellet industry, the U.K.’s Drax Group (LON:DRX) has been subject to particular scrutiny in Canada, the U.S. and Europe.

The European Parliament is now under pressure to eliminate subsidies to the wood pellet industry and is proposing new regulations that would restrict wood pellet makers to using wood waste only – a move aimed at addressing concerns that timber is now being harvested in Europe and North America to feed the pellet industry.

The use of wood pellets has allowed Drax to switch four of its six U.K. generating units from coal to biomass, and the company is planning to invest £2 billion ($3 billion) in a bioenergy carbon capture project that it says would result in eight million tonnes of negative CO2 emissions annually.

So why are environmentalists in Europe and North America ramping up campaigns against the wood biomass industry?

As biomass energy demand grows, they say the industry is running out of wood waste and increasingly resorting to harvesting forests. If not done sustainably, this can result in the removal of important carbon sinks. So is burning wood instead of coal to generate power really carbon neutral? Or is burning wood “dirtier than burning coal,” as the New York Times suggested in a recent story on the wood pellet industry and its impacts on northern European forests.

BIV put that question to five scientists and academics, four of whom contributed to the IPCC Working Group 3’s latest assessment.

A common response from the IPCC scientists was “it depends.”

Generally, biomass as an energy source is much better than coal, said Joana Portugal Pereira, senior scientist for the IPCC’s Working Group 3 on Mitigation of Climate Change.

Burning coal to generate one kilowatt hour (kWh) of electricity releases about 900 grams of CO2, she said. Natural gas produces 450 grams of CO2 per kWh. By contrast, generating one kWh of electricity by burning biomass would produce “neutral carbon dioxide emissions,” Pereira said.

However, there may be genuine concerns about the carbon deficit – the time it takes for regrowing trees to absorb the CO2 released on combustion. The deficit may widen the more whole lives trees are used, instead of wood waste that is already being generated through forestry anyway, especially if the forests are not sustainably managed.

“Bioenergy impacts vary considerably depending on its source and technology,” Pereira said. “If wood biomass plantations are drivers of land-use changes and deforestation or require intensive use of fertilizers and other fossil inputs, the carbon deficits and payback time can be as high as 84 years.” 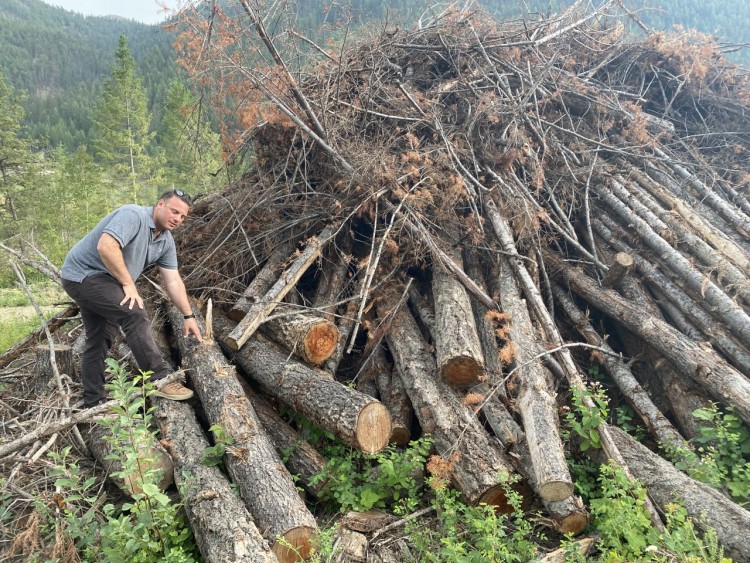 A slash pile left over from logging on private ranch land.

As long as wood waste that is already being generated is used to make wood pellets, the carbon deficit is less of an issue, said Chris Bataille, adjunct professor at Simon Fraser University (SFU) and a lead author for the IPCC Working Group 3’s sixth assessment.

It’s when trees are planted and harvested solely for use as bioenergy that the climate benefit calculus may change.

“Everywhere that does a lot of wood harvesting, if you only did residuals and the slash that’s getting burned anyway, then I don’t think it’s a problem,” Bataille told BIV.

“If you’ve got slash and residuals that will get burned anyway, yes – turn it into pellets, because it will replace coal somewhere else.”

But environmentalists say primary forests are now being harvested to feed the wood pellet industry.  If true, that would be a legitimate concern, Bataille said, because forests and forest soil are important carbon sinks.

“If and when that does occur, that should be just flat out stopped,” Bataille said.

The biggest concern with growing trees to feed the bioenergy industry may be the carbon deficit. That’s the time it takes for regrowing trees to take the CO2 that was emitted upon combustion.

John Sterman, a professor and director of the MIT System Dynamics Group, co-authored a study in 2018 that estimated the carbon deficit can be as much as 44 to 100 years.

Sterman said the demand for wood pellets will likely exceed the availability of wood waste.

“That growth cannot be met from the current supply of waste and residues from lumbering and paper production, or from existing plantations,” Sterman said. “This means, as we are seeing already, that the wood needed would have to come from cutting existing forests.”

Brent Sohngen, professor of environmental and resource economics in the Department of Agricultural, Environmental and Development Economics at Ohio State University, disagrees.

Sohngen was a lead author on Chapter 7 (forests and agriculture) for the IPCC Working Group 3’s sixth assessment.

Any greenhouse gas (GHG) life cycle assessment of forestry and bioenergy needs to factor in the existing forest industry, Sohngen said, as the wood biomass business is part of the forest economy.

“The biomass system is not just harvesting a single tree or one stand to burn and create some electricity. It’s basically entering into an existing market of people who are already harvesting trees. In most places, there’s enough investment to regenerate those trees, so you get that carbon back pretty quickly. It’s not 40 to 50 to 100 years.”

As for the claim that wood biomass may be worse than coal, in terms of GHGs, Sohngen said that is “crazy.”

“The question of whether it’s even close to coal is ridiculous,” he said.

Mark Jaccard, an SFU sustainable energy economist and contributor to the sixth assessment of the IPCC Working Group 3, appears to agree with Sohngen.

Even if trees are grown specifically for bioenergy, that should be considered carbon neutral, he said.

“It is great if they are using waste wood that would be burned anyway,” Jaccard said. “But … even if it was dedicated biomass plantations managed for soil conservation and sustained annual allowable cut, it would still be fine to use bioenergy and it would still be net-zero emission.”