2019 Newsmaker of the Year: Greta Thunberg put climate change on the front page

By Nelson Bennett | December 27, 2019
Greta Thunberg in Vancouver with Severn Cullis-Suzuki, who was also a child climate phenom when, at the age of 12, she addressed a conference in Rio in 1992 | Credit: Kevin Hill, Vancouver Courier

Editors at Glacier Media in British Columbia have chosen the Climate Emergency as the newsmaker of the year in 2019. Its significance as an issue globally, nationally and locally was a recurring theme in our coverage, as this story from Glacier's Nelson Bennett notes. Included at the bottom of the story are local links to some of our coverage of climate change in our community.

It probably didn’t take Time Magazine’s editors long to decide who would grace their cover this year for 2019’s person of the year.

Regardless of whether you think Greta Thunberg is a messiah or the marionette of climate change alarmists, there’s no questioning the impact she had.

Somehow, a 16-year-old girl from Sweden managed to do what Al Gore, Bill McKibben and countless activists before her failed to do – mobilize people to take to the streets in the tens of thousands to demand action on climate change.

And if there were one word or phrase that summed up the western media’s preoccupations in 2019, it would either be “impeachment” or “climate crisis.”

As part of the Covering Climate Now project, led by The Nation and Columbia Journalism Review, close to 400 media outlets around the world agreed in 2019 to start covering climate change as a “climate crisis.”

Another 10,000 were estimated to have turned out to hear Thunberg herself, when she visited Vancouver on October 25. 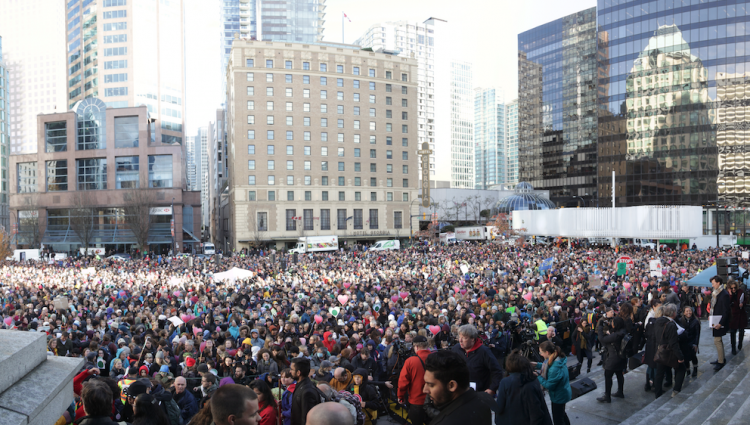 An Ipsos poll found climate change to be the second highest concern among voters in the federal election, the results of which were read by many as a referendum approving strong government action on climate change. The absence of any real climate change policies may have cost Conservative Party Leader Andrew Sheer votes.

Public pressure also resulted in a number of fossil fuel divestment decisions by universities, banks and pension funds in 2019.

In December, the University of British Columbia’s (UBC) board of governors officially declared a climate emergency, and announced it would begin divesting its endowment fund of fossil fuels.

In 2019, fourteen parliaments, including Canada’s, formally passed resolutions declaring a climate emergency. Pope Francis even weighed in, calling for a “radical energy transition.”

Though questions surround the time scale of the radical energy transition that climate strikers have demanded – many observers say it will take decades – there are signs that it has at least begun, however, and one academic believes the climate crisis zeitgeist of 2019 may have given it a much-needed push.

In the U.S., 11 coal companies filed for bankruptcy, just since Donald Trump took office, according to Newsweek, as utilities switched to renewables and natural gas, and investors fled what has become a stranded-asset risk.

The global stock of electric vehicles increased 63% in 2018 over the previous year, according to the International Energy Agency, which forecasts global EV stock to hit 130 million by 2030, under existing policies, or 250 million, if more aggressive climate action plans are implemented.

In B.C., EV adoption spiked in 2019, thanks in part to a new federal subsidy. CleanBC’s target is for zero-emission vehicles to represent 10% of all new passenger vehicles sold in B.C. by 2025. But it already hit 9% in 2019, according to Energy and Mines Minister Michelle Mungall.

In 2019, the U.K. marked a milestone when it went for more than two weeks without generating any power from coal, thanks to nuclear power and a major build-out of wind power.

“Also, decades of efforts to make wind and solar commercial are now finally bearing fruit, winning against coal and gas generation in auctions without subsidies,” said Chris Bataille, one of the authors of the Deep Decarbonization Pathways Project.

He added battery prices are falling a decade ahead of expectations, and that large automobile manufacturers are now “betting real capital on decarbonization.”

In Canada, a national carbon tax was essentially affirmed by the electorate, which may not have handed the Trudeau government a majority, but elected more MPs from parties that support carbon taxes and other climate change policies than those that didn’t.

“When major changes are made like that, there’s a kind of inertia, and even if a new government has a different ideological orientation, they’re hesitant for a variety of reasons to reverse course,” said David Tindall, a UBC sociologist who studies social movements.

Even if the climate emergency movement of 2019 loses steam, it may have provided enough push on the policy front to create a lasting impact, Tindall said.

“Even if there is a short-term or medium-term downturn, in terms of public opinion, I think that sufficient climate action has been made that the progress is going to keep going,” he said.

“So there’s a lot of actions that are going on, and even if public opinion goes down in six months for a while and this becomes more of a backburner issue, I think that these concrete actions are going to have inertia and are going to have a concrete effect.”

Business in Vancouver’s coverage of climate change issues in 2019:

The cold reality of effective policies to combat climate change

Divestment can’t hold back ocean of demand for oil: analysts

Not all carbon offsets are created equal

The pipeline we do not know