By Glen Korstrom | October 12, 2021, 11:30am
Artist’s rendering of the proposed redevelopment of Granville Street between Robson and Smithe streets | Perkins&Will

A proposed project in the heart of downtown Vancouver aims to protect heritage, enable more concerts and events and add office space to revitalize Granville Street during the day.

What could hold the development back, however, is that its 260-foot proposed height is far beyond the 90 feet that zoning allows.

This means city council will soon seek public feedback on whether to allow Bonnis Properties principals Kerry and Dino Bonnis to build a 16-storey, Perkins&Will-designed office building on land from the corner of Robson and Granville streets south almost to Smithe Street.

One selling point for the project is that it would protect the 92-year-old Commodore Ballroom, and other old buildings, as well as the Granville Street entrance to the Orpheum – adding elevators to make that entry point to the city-run theatre wheelchair-accessible.

It also adds back-of-the-house infrastructure to benefit the Commodore and the Orpheum.

Bands that play the Commodore now sometimes occupy the facility for a few days in advance of a single concert. One day can be spent setting up; another packing up.

The additional back-of-house space will enable a second band to prepare for a show, while another one gets ready to leave.

The project would also donate a 14,700-square-foot, three-storey performance venue, valued at $45 million, to the city. The space could host arts and culture performances and provide expanded rehearsal space for the Vancouver Symphony Orchestra.

The project also conforms to a vision for the street that the Downtown Vancouver Business Improvement Association is advocating.

A recent report by consulting firm Resonance for the DVBIA discussed a plan to transform Granville Street into a 24-hour, largely commercial street that has office tenants providing pedestrian traffic during the day, while entertainment and hospitality venues draws visitors by night.

Architecture fans, such as Anders Falk, who is an administrator of the Facebook (Nasdaq:FB) group Beautiful B.C. Views and Architecture, said he likes the design and that people he has talked to are equally positive.

That does not mean that everyone likes the way the project looks.

“Some will say, ‘It looks like a giant spaceship landing on top of the Commodore. It’s ugly,’” said Vancouver Coun. Pete Fry, who likes that the proposal aims to save heritage.

Fry suggested that putting a modern glass office complex atop a heritage building is similar to the recently approved project at the northeast corner of West Hastings and Granville streets, where Musson Cattell Mackey Partnership has designed a glass office structure that towers over, and becomes part of, the adjacent 92-year-old Royal Bank building. 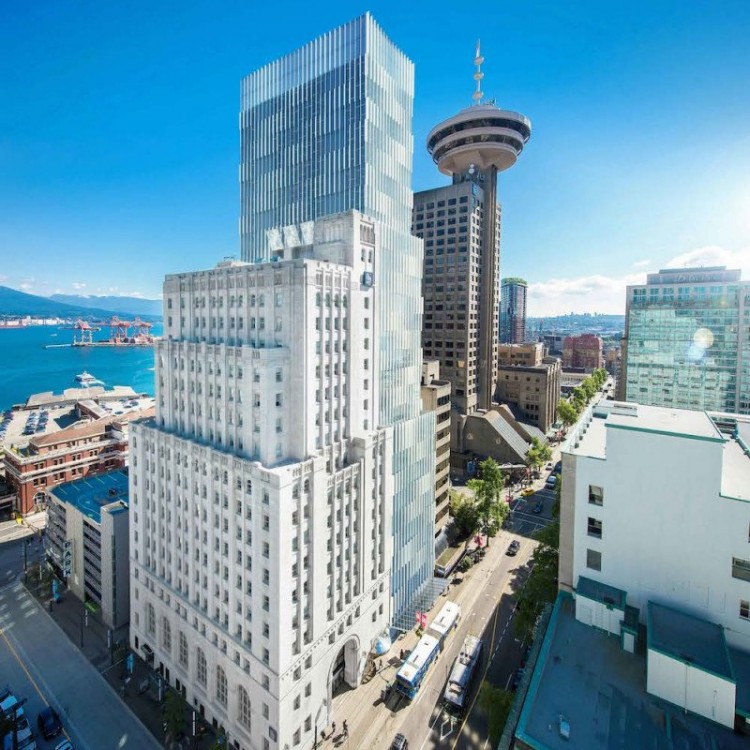 (Image: Here is a rendering of the Musson Cattell Mackey Partnership-designed glass office structure that towers over, and becomes part of, the adjacent 92-year-old Royal Bank building |  MCMP) 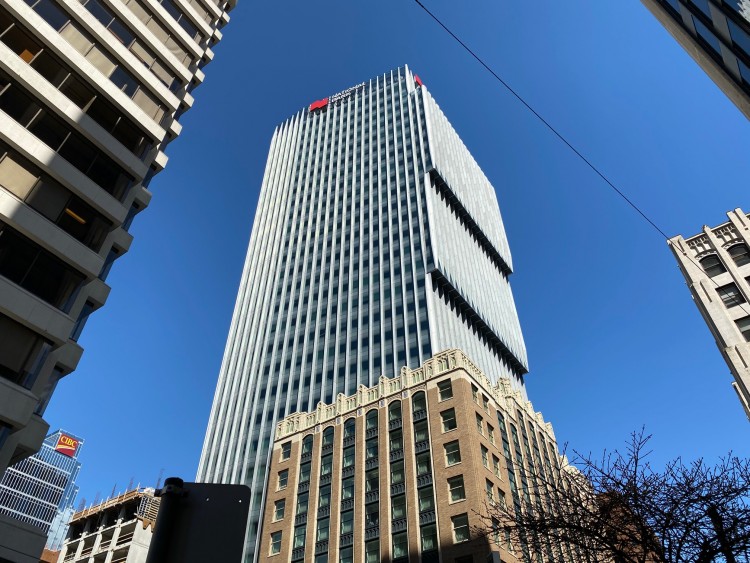 Kerry Bonnis told BIV that because the Commodore Ballroom is not protected by law, it was his company’s “voluntary decision” to keep the legendary concert and dance venue in tact.

“It would have been cheaper just to knock it down,” Bonnis said. “But it’s important for us, we believe, to integrate these historical assets and bring attention to them and have the juxtaposition of the old and the new.”

Fry told BIV that he thinks Vancouverites would be “clamouring for Kerry Bonnis’ head” were he to demolish the Commodore, and that Bonnis’ desire to save heritage could help him win support from city council.

Part of Bonnis’ pitch to allow the greater height on the project’s north end, at the corner of Robson and Granville streets, is that the city allows significantly taller buildings across Robson Street on Granville Street’s 700-block in the city’s central business district.

That building, which includes a Winners and other retailers, takes up about half of the street’s 700-block, up to the 111-year-old Vancouver Block building.

Bonnis said that, within the next five to 10 years, he plans to demolish the 18-year-old Best Buy building, and redevelop it to be a significantly taller office tower. Maximum building heights in Vancouver's central business district can be 600 feet, although a view cone that crosses the site may force the redevelopment to be lower than that.

His proposed project for Granville Street’s 800-block starts at 260 feet tall at its north end, but tapers down to 150 feet at its southernmost point.

The result of that taper is that the building would act as a buffer between future taller buildings to the north and shorter ones to the south.

Until he redevelops the Best Buy building, however, one thing that structure will be known for is its two video screens outside its fifth floor that face the intersection at Robson and Granville streets.

Bonnis’ proposed 800-block building is designed to have a two-storey video screen that wraps around the corner of Robson and Granville streets to face the Best Buy building. 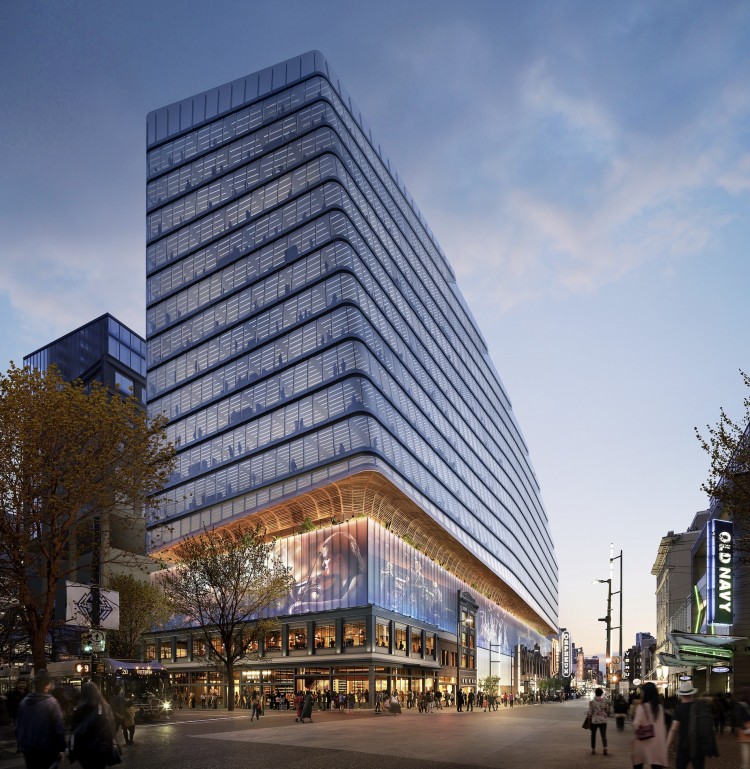 (Image: This rendering of the proposed building on the southeast corner of Robson and Granville Streets shows the two-storey video screen that helps ground the intersection as the hub of Vancouver's entertainment district | Perkins&Will)

Perkins&Will partner Ryan Bragg, who heads the project’s architectural team, told BIV that the video screen will make it clear that the intersection is in the city’s entertainment district and that it is a place for people to gather – like a small Times Square.

“Having an opportunity to have an integrated, active sign like that really provides for that potential,” he said, noting that after Canada’s gold medal hockey win at the 2010 Olympics, part of Robson Street was closed and that intersection became packed with celebrations.

“It’s sort of a springboard for a number of other types of gatherings and the collection of people,” he said.

In the 1950s, some people called Granville Street the neon-sign capital of North America, and the vibrant signage would also be an ode to that time, said Bonnis.

He added that his team has found an old blade sign for the Commodore and that his plan would be to return it to its former location. 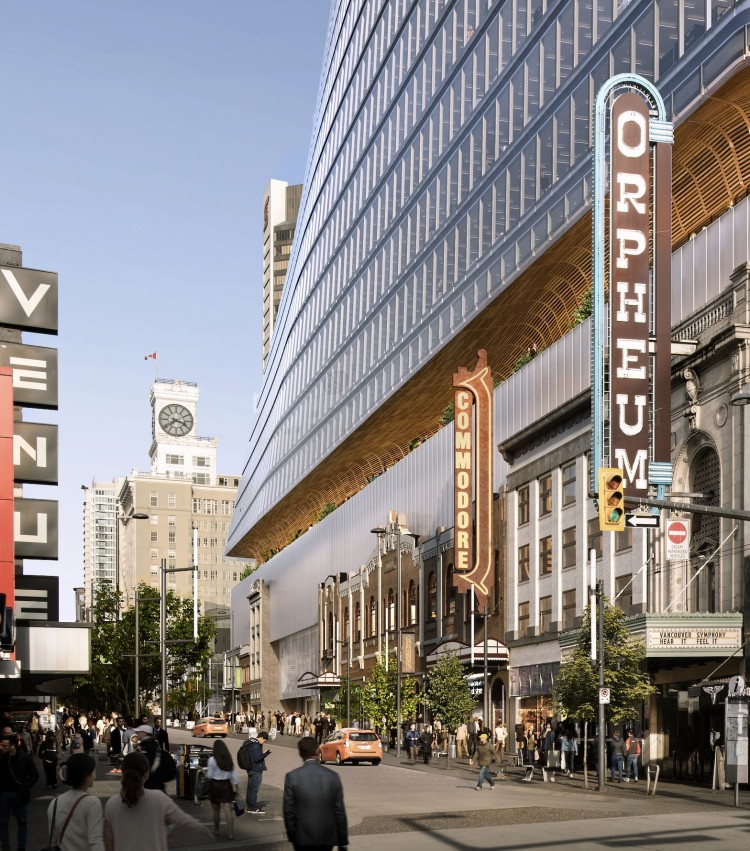 (Image: This rendering of the proposed redevelopment in Granville Street's 800-block shows the original blade sign for the Commodore Ballroom | Perkins&Will)

His proposed redevelopment includes the entire block between Robson and Smithe streets, except for a small building at the northeast corner of Smithe and Granville streets, where a Camouflage Military Surplus store operates.

Bonnis said he tried to buy that building but the owners, a local family, did not want to sell.

He has relocated some tenants from units in the block, while others have left on their own. Bonnis has also started to sign tenants to short-term “sub-market” leases while he waits for the project to gain city approval.

“There’s only a finite amount of time that we can sustain that – having the vacancies,” he said. “There is an urgency to getting this done as soon as possible.”

He suggested that approval within six to nine months would be reasonable. 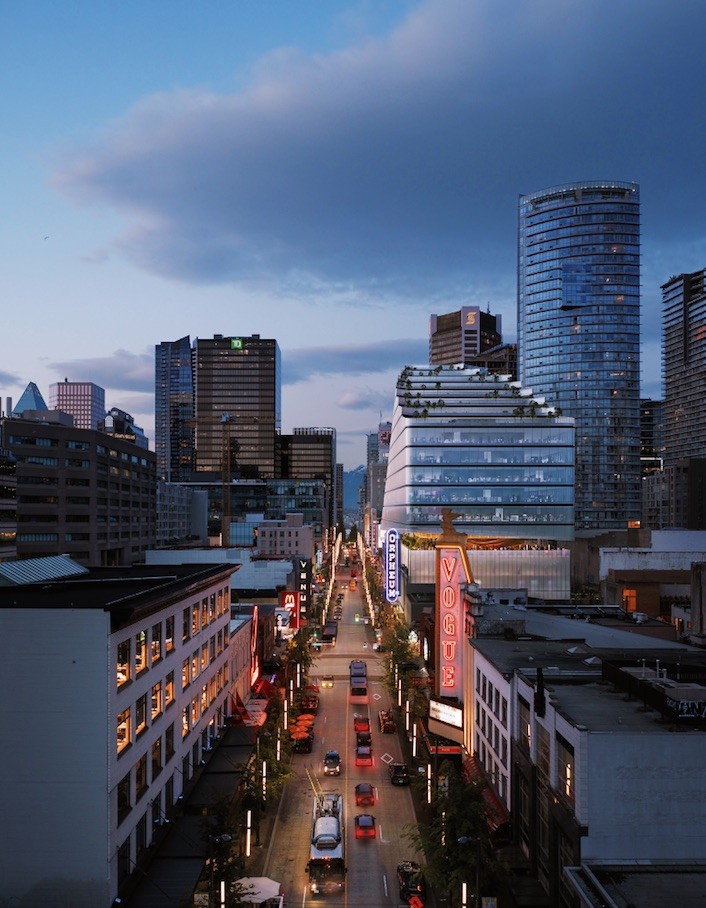 (Image: Rendering of Granville Street looking north, with the addition of the proposed project in the 800-block | Perkins&Will)

As to whether city council will vote in favour, Fry said, “the devil is in the details,” but that he thinks the project is “a step in the right direction” to reimagine Granville Street with more office space and more capacity for nightlife.

“There’s a depth of understanding, for many on council, about the significance of Granville Street for our city,” he said.

She told BIV that she “hopes” the project gets council support because it expands the city’s cultural amenities.

“Granville Street has needed some new energy and life and revitalization for a period of time, and I think it was really one of the most hard-hit areas during COVID,” Kirby-Yung said.

“That’s why I think a project that could really re-energize, and provide a foundation for success could be really important."

Kirby-Yung said that a rejuvenated Granville street with more capacity for arts venues will help keep a needed dimension of city life.

"We have a really tough time, for all the obvious reasons – demand on space, cost of land – in keeping artists, and supporting them in the city," she said.

"When you start to lose things like the ability for live music production, you lose the soul of the city." •